A New, Easy Way to Track Your Representative on Spending 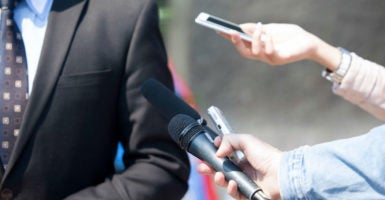 The Coalition to Reduce Spending has released the Spending Tracker, a tool that records representatives' votes on spending and gives each member a cumulative spending score. (Photo: iStock Photos)

Americans who are concerned about unsustainable and reckless government spending have faced a fundamental problem: It’s hard to track what their representatives are doing to either curb, or increase, spending.

But thanks to a new tracking tool, those days may be coming to a close.

The Coalition to Reduce Spending has just released a tool called the Spending Tracker. This will allow taxpayers to see how their money is being spent, enabling them to hold their representatives accountable for overspending.

It has long been difficult to present spending bills and their budgetary impacts to the public in a clear and concise manner that is accessible to all. These data are often presented as a complicated mess of numbers and calculations, and it takes constant effort to track and assess the impact of each spending bill that comes through Congress.

Fortunately, the new Spending Tracker turns what would normally be a full-time job of studying congressional activity into a user-friendly tool for engaged citizens.

The Spending Tracker encourages constituents to ask the question, “What’s my congressman’s number?” This number refers to each representative’s cumulative spending score, revealing who in Congress is spending big and who is cutting costs.

The tool tracks not only past and current spending, but also future spending based on Congressional Budget Office scores. These CBO scores reflect estimates of how each bill will affect the federal budget.

The CBO’s 10-year fiscal outlook for the federal budget should be troubling to even the most indifferent of Americans. Overspending has driven the national debt to an astounding $20 trillion.

Interest payments on our debt alone will cost taxpayers $768 billion by the end of the decade—$30 billion more than we will spend on national defense that year.

As the Coalition to Reduce Spending’s president, Jonathan Bydlak, said in a recent interview, “A lot of people talk a good game”—referring to members of Congress on both sides of the aisle who make empty promises to curb federal spending.

This tracking tool will help the public observe spending over time to determine whether their local members of Congress actually practice what they preach.

While some members devote great effort to limiting excessive spending—such as Rep. Justin Amash, R-Mich. (who is Spending Tracker’s “top saver” for the 114th Congress)—many members of Congress score poorly.

When just glancing at the rankings, we see that many conservatives, moderates, and liberals alike have a spending problem. This is despite wildly different political ideologies on the role of government.

As Congress votes on various spending bills and other fiscal changes throughout the year, Spending Tracker will be there to help the public stay up to date and informed.