Pakistan Could Easily Become a Nuclear Hazard. Here’s What Needs to Be Done. 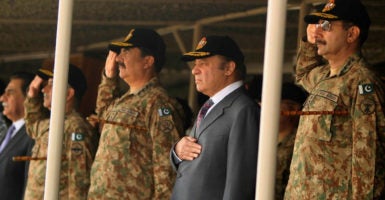 Michael Krepon, co-founder of the U.S.-based Stimson Center, whose views are widely respected both in South Asia and in Washington, has written a thought-provoking piece on the future of U.S. policy toward Pakistan.

In the article, Krepon argues in favor of a status quo U.S. policy toward Pakistan that relies solely on inducements and engagement, rather than exerting pressure on Pakistan.

Krepon acknowledges that this policy approach has been ineffective in convincing Pakistan to crack down on some terrorist groups that endanger core U.S. national security interests in the region. Nonetheless, he argues for a status quo policy that does not levy consequences on Pakistan for continued support to international terrorist groups.

Krepon’s main reason rests largely on the idea that the nuclear issue is more important than the terrorism issue. Krepon seems to believe that if the U.S. penalizes Pakistan for its continued support for some terrorist groups, the U.S. will lose leverage over Pakistan in keeping its nuclear weapons safe and secure.

Krepon also argues that “the future of Pakistan is more important to the United States than the future of Afghanistan.”

Both of these assertions rely on false choices and confuse the problem at hand.

One of the primary U.S. concerns regarding Pakistan’s nuclear weapons is the danger that they could fall into terrorist hands. A second concern is that Pakistan would use its nuclear weapons in a potential conflict with India.

Additionally, if the Taliban make further territorial gains in Afghanistan—aided by having a sanctuary inside Pakistan—this will facilitate the revival of al-Qaeda in the region and boost the morale of Islamist extremists across the globe.

These are three potentially very dangerous scenarios that the U.S. must work to prevent. Putting pressure on Pakistan to crack down on terrorist groups within its territory is key to making sure these scenarios don’t come to pass.

Appeasement Will Not Work

Krepon’s status quo policy would likely lead to the growth of anti-India terrorist groups like the Lashkar-e-Taiba, which conducted the 2008 Mumbai attacks that nearly led to military conflict between the nuclear-armed neighbors.

Moreover, U.S. acquiescence to Pakistan’s continued support for some terrorist groups would allow an overall conducive environment for terrorism to thrive in the country—something that puts Pakistan’s long-term stability at risk.

It is precisely because of these dangers—the threat of an Indo-Pakistani conflict that could go nuclear, the potential nexus between terror and nuclear weapons, instability of the Pakistani state from the blowback of supporting terrorism, and the need to stabilize Afghanistan—that the U.S. must adopt a more pointed policy approach with Islamabad. A Pakistani soldier stands near the debris of a house destroyed during a military operation against Taliban militants in Miranshah, North Waziristan, July 9, 2014. (Photo: Stringer/Pakistan/Reuters/Newscom)

This line of reasoning is spelled out in a report that I drafted with former Pakistani Ambassador to the U.S. Husain Haqqani and with input from several other U.S.-based Pakistan experts.

The report recommends the Trump administration take a sharper, more clear-eyed policy approach toward Pakistan that includes consequences for Pakistani failure to rein in terror groups that threaten stability in Afghanistan, as well as raise tensions with India. Consequences should include things like enforcing conditions on military aid and revoking Pakistan’s status as a major non-NATO ally.

The report stops short of recommending that the U.S. declare Pakistan to be a state sponsor of terrorism this year—though it recommends keeping that option open for the future.

I have stated my personal opposition to doing this on numerous occasions. Designating Pakistan a state sponsor of terrorism would preclude the U.S. from providing any kind of aid to Pakistan and would lead to an irreparable breach in the relationship.

While tightening U.S. counterterrorism policies toward Pakistan is necessary, it’s also not in the U.S. interest to make an enemy out of Pakistan.

Our report revolves around the notion that evoking change in Pakistani terrorism policies is desirable not only for U.S. security objectives, but also for the sake of Pakistan’s own future.

Contrary to what Krepon’s article suggests, raising the bar on the Pakistanis is not an effort to stigmatize them. Krepon’s article wrongly suggests that any policy other than the status quo amounts to disengaging with Pakistan.

Krepon’s argument seems to be that the U.S. should allow Pakistan to continue support for some terror groups and wait patiently until Pakistan itself realizes the cost of its dangerous behavior through what he calls a “clarifying process.”

The Path to Stability

But the risks in the region are too acute and immediate to wait patiently and assume that Pakistan will eventually change its policies without incurring some international cost. Pressure from the United States is needed.

At the same time, the Trump administration should both publicly and privately maintain avenues for Pakistan to become a U.S. ally in the future. As we state in the report:

Were Pakistan to cease its current tolerance of and support to terrorist groups, one can envisage grounds for common interest and policies on a range of issues that would form the basis of mutual interest. This could involve a package of trade and investment cooperation that would be mutually win-win for the economies of the United States and Pakistan.

Far from stigmatizing Pakistan or proposing a witch hunt, our report provides a sound and practical way forward for improving the prospects for stability in the region, reducing global terrorist threats, and providing the basis for a stronger U.S.-Pakistan partnership over the long term.