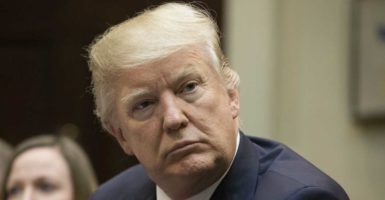 President Donald Trump met with a variety of Americans on Monday who say they've suffered under Obamacare. (Photo: UPI/Newscom)

On Monday, President Donald Trump met with Americans described by the White House as “victims” of Obamacare to hear their stories.

In what the administration called a “listening session,” Trump referred to the Affordable Care Act as the “very, very failed and failing Obamacare law” as he heard from citizens in the Roosevelt Room who have had negative experiences with the health care law, according to the White House press pool.

“We paid $8,000 for five months and were never able to use it,” Georgia woman Brittany Ivey told Trump.

Ivey, who said she left her full-time job in 2009 to focus on her children, claimed she had a family plan for four that went up by 102 percent. After she lost insurance that had been provided by her husband’s employer, Ivey said she looked for a new job with health care benefits but was unable to find employment that would have provided insurance.

According to Ivey, the family had to purchase Obamacare coverage, which resulted in the loss of their preferred doctors.

Louis Brown, a Virginia resident and a former Democratic National Committee staffer, said, “[People should be] at the center of our American health care system, not the government.”

Brown said that he worked for the DNC during the early stages of Obamacare, but added he quit the job due to his pro-life stance. He said he supported Trump in the presidential election.

Carrie Couey, a cattle rancher from Colorado, said that the health care costs associated with Obamacare affected her family so much that it put her food source at risk.

“We can’t afford our [ranching] equipment if we’re paying these rates year, after year, after year. Our food source is in jeopardy because of this health care law,” Couey said.

Elias Seife, a second-generation immigrant from Cuba living in Florida, said he had his individual plan canceled.

Robin Armstrong, a doctor from Texas, said many of his patients are not sufficiently insured under Obamacare, as they are affected by expensive premiums and deductibles.

Armstrong said he likes the new American Health Care Act, the Obamacare replacement proposed by House Republicans, saying, “I actually read the bill that’s been produced, that’s coming out of the House now and I really like a lot of the changes in it. I think this is going to correct a lot of issues that Obamacare has had.”

The president voiced his opposition to the media’s coverage of Obamacare, claiming that the press is attempting to cover up the health care law’s downfalls to make it “look so good.”

“First of all, it covers very few people and it’s imploding. And [2017] will be the worst year,” Trump said.

Trump attributed Obamacare’s favorable media coverage to nostalgia, claiming the law is similar to President Barack Obama in appearing better now than it actually is.

“It’s a little bit like President Obama. When he left, people liked him. When he was here, people didn’t like him so much. That’s the way life goes. That’s human nature,” he said.

Trump concluded his remarks by calling Obamacare a “horrible thing.”