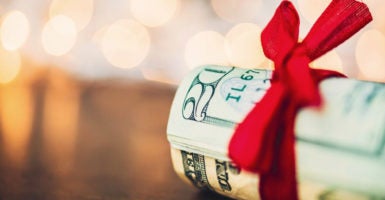 The Bridge to Nowhere is baaaaaaacccck. Well, it might soon be if some House Republicans have their way.

It’s only been seven years since Republicans famously banned earmarks in a closed-ballot conference meeting, much to the elated response of their constituents. Back then, Republicans were in the minority and were making promises of limited government and fiscal responsibility and Obamacare repeal amid a new era of progressive government.

But memory is a fickle thing.

Now, seven years, a new president, and a supermajority later, some Republicans are changing their tune. Despite the new Republican president’s calls to “drain the swamp,” it appears that swamps are still en vogue—and breeding more and more bad behavior.

One of the House cardinals and chairman of the Rules Committee, Rep. Pete Sessions, R-Texas, has been trying to coin a new phrase to warm up sympathy for an earmark rebirth: “For anyone to use the term earmarks, that would be at least a six-year-old term. The term that is used is congressionally-directed spending.”

If you too have a hard time believing that “congressionally-directed spending” is totally different, then here’s a way to help you win that argument.

Special interests are the name of the game when it comes to earmarks. And if there is one thing folks on either side of the earmark debate have in common, it’s that we all have special interests. We have certain projects or priorities that we believe are worthy of receiving funds to make our communities better.

However, we disagree about where the money will come from: the checkbook of hardworking, tax-paying Americans, or private donors who are invested in the cause.

Even if a project is deserving of taxpayer funds, it’s likely best that that city, county, or state pay for it. Why should someone in California pay for a bike path in New York?

Bonus tip: Remind your friends that when the government pays for it, it’s not “free.” The dog park around the corner isn’t the result of a government that loves you and wants you to have nice things. You’re paying for it.

You don’t need to go any further than the Bridge to Nowhere to understand how powerful examples can be. But in case you’re looking to add a couple more, try these on for size:

All of these examples and more ridiculous pork projects are outlined in last year’s “Wastebook” by Sen. Jeff Flake, R-Ariz., who has taken up the mantle for retired Sen. Tom Coburn, R-Okla.

The words you choose to use in your discussion can do you many favors. There’s a reason why lawmakers are trying to find a more pleasing label to attach.

So calling earmarks what they are will go a long way to shape public opinion of your argument. For example, use “pork” or “pet projects” when describing funds that are going to special interests on the behalf of a well-connected member of Congress.

We’ve already learned that “congressionally-directed spending” won’t fool anyone, which means you’re already winning the battle. But now it’s time to speak up.