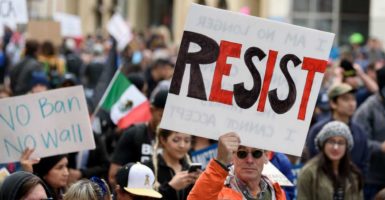 The meeting took place at the Carlos Rosario International Public Charter School auditorium and was filled with translators and illegal immigrants, as part of the D.C. Council’s effort to stymie the federal government crackdown on illegal immigration, DCist reports.

“The new presidential administration has raised fears in our immigrant community,” Nadeau said. “It’s difficult as an elected official who supports you all to calm the fears because they’re very real.”

During the meeting, attendees were told not to take any pictures, so as to avoid identifying information of anyone leaking out into the public.

Nadeau’s office invited Abel Nunez, executive director of the Central American Resource Center, to tell illegal immigrants they have the right not to open their doors and refuse entrance if ICE agents do not have a warrant.

The District is home to a fairly substantial illegal immigrant community, with estimates placing the number at approximately 25,000.

Nunez added that while the Obama administration refused to allow ICE agents to enter churches and schools to detain illegal immigrants, the Trump administration is unwilling to hamper ICE agents in the same way.

Mayor Muriel Bowser has reaffirmed her intent that the District remain a sanctuary city, even going so far as to launch a $500,000 program to provide representation for illegal immigrants undergoing deportation hearings in court.

“Washington will value all immigrants, regardless of immigration status,” Jackie Reyes, the executive director of the Mayor’s Office on Latino Affairs, told DCist. “We do get calls about people being scared, and that has increased, but we want to be on message: Keep repeating and repeating that we’re a sanctuary city.”

The District functioning as a sanctuary city offers illegal immigrants a limited amount of protection by prohibiting local police from asking people about their immigration status when stopped.

However, it’s possible that the District could lose up to $1 billion in funding if it continues to oppose the federal government.