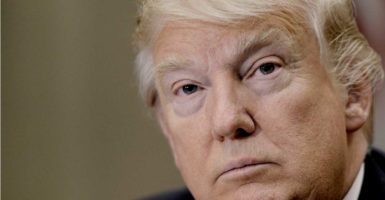 The Department of Homeland Security will make prioritization key in its beefed-up enforcement of the border and the interior of the country—removing criminals first, while more recent arrivals will also face expedited removal.

However, critics call it “mass deportation” that will face a legal challenge.

Homeland Security Secretary John Kelly released implementation memos to agencies to enforce President Donald Trump’s executive orders he signed in January. A key new policy is expanding the number of illegal immigrants subject to “expedited removal” procedures if an illegal immigrant can’t provide evidence they have been in the country for more than two years.

Among other matters, the memos call for moving forward on building a border wall, hiring more Customs and Border Protection agents to stop illegal border crossings, and adding more Immigration and Customs Enforcement agents to police the interior. Also, the Victims of Immigration Crime Engagement Office was established within ICE.

“The message from this White House and from DHS is that those people who are in this country and pose a threat to our public safety and committed a crime will be the first to go and we will aggressively be making sure that occurs,” Spicer said during the White House press briefing.

“The past administration put a priority on criminals and those that just entered the United States,” Mehlman told The Daily Signal. “The difference is that the Obama administration just focused on recent arrivals at the border, and sent them back. That’s important, but we also need serious interior enforcement.”

“These memos confirm that the Trump administration is willing to trample on due process, human decency, the well-being of our communities, and even protections for vulnerable children, in pursuit of a hyperaggressive mass deportation policy,” Jadwat said in a public statement. “However, President Trump does not have the last word here—the courts and the public will not allow this un-American dream to become reality.”

“There is probably not a strong challenge to the order Secretary Kelly signed, but a question of due process could come up regarding expedited removal,” Blackman told The Daily Signal. “If you’re picked up at the border and turned around there usually is no question. Expanding that to being picked up at the interior, that could arguably imply a stronger connection to the U.S. and require due process for removal.”

A legal challenge would have little merit, but doesn’t necessarily mean the administration will prevail, said Hans von Spakovsky, senior legal fellow at The Heritage Foundation.

“It is well within the administration’s authority, but anyone can file a lawsuit, and that won’t stop errant judges from acting,” von Spakovsky told The Daily Signal.

Spicer stressed that the administration is only enforcing immigration law as it would any other law.

Our job, especially here at the White House, isn’t to call balls and strikes and say this person only violated part of the law. If this was any other subject, if this was tax evasion and we said, ‘Well, they really only cheated on their taxes a little,’ you wouldn’t be saying should they be going to prison or should they be getting a fine. At some point laws are laws. If people have a problem with the law, whether it’s at the local, state, or federal, then we should petition our lawmakers and executives to change it. Our job should not be should this individual not have to abide by the law, should this individual get a pass?