The Pro-Life Legacy of Norma McCorvey, the ‘Roe’ of Roe v. Wade 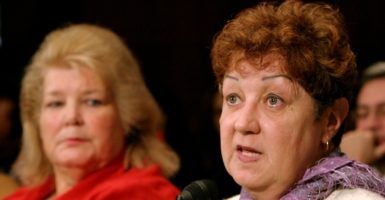 "Instead of helping women in Roe v. Wade, I brought destruction to me and millions of women throughout the nation," Norma McCorvey said. (Photo: Shaun Heasley /Reuters/Newscom)

Jane Roe did not live out her life by the script.

As the “Roe” of the 1973 Supreme Court decision legalizing abortion, she would have been expected to be a staunch pro-choice advocate for the rest of her life.

Roe, whose real name was Norma McCorvey, died Saturday in Texas of a heart ailment. She was 69.

In an ad from 2008, as the Catholic News Agency noted, McCorvey detailed her change of views on abortion after she became a Christian in the mid-1990s.

“Upon knowing God, I realized that my case, which legalized abortion on demand, was the biggest mistake of my life,” she said.

“You see, abortion has eliminated 50 million innocent babies in the U.S. alone since 1973. Abortion scars an untold number of post-abortive mothers and fathers and families, too.”

It wasn’t the first time she’d spoken about her pro-life perspective.

“I believe that I was used and abused by the court system in America,” McCorvey said in testimony in 2005 before a subcommittee of the Senate Judiciary Committee. “Instead of helping women in Roe v. Wade, I brought destruction to me and millions of women throughout the nation.”

She detailed her journey over the years from abortion advocate to pro-life activist in that testimony, in which she mentioned the baby she ultimately chose not to abort:

I am glad today that that child is alive and that I did not elect to abort. I was actually silent about my role in abortion for many years and did not speak out at all. Then, in the 1980s, in order to justify my own conduct, with many conflicting emotions, I did come forward publicly to support Roe v. Wade. …

Then around 1992, I began to work in abortion clinics. Like most Americans, including many of you senators, I had no actual experience with abortion until that point. When I began to work in the abortion clinics, I became even more emotionally confused and conflicted between what my conscience knew to be evil, and what the judges, my mind and my need for money were telling me was OK. I saw women crying in the recovery rooms. If abortion is so right, why were the women crying?

Even Sen. Hillary Clinton on January 25, 2005 was reported by The New York Times to finally admit ‘that abortion is a sad, even tragic choice for many, many women.’ Actually it is a tragic choice for every child that is killed and every woman and man who participates in killing their own child, whether they know it at the time or not. Many women will be in denial and even pro-choice for years like I was.

But participating in the murder of your own child will eat away at your conscience forever if you do not take steps to cleanse your conscience, which I will discuss later.

I saw the baby parts, which are a horrible sight to see, but I urge everyone who supports abortion to look at the bodies to face the truth of what they support. I saw filthy conditions in abortion clinics even when ‘Roe’ was supposed to clean up ‘back alley’ abortions. I saw the low regard for women from abortion doctors.

My conscience was bothering me more and more, causing me to drink more and more and more. If you are trapped in wrongdoing then all you can do is justify and defend your actions, but the pain gets worse and worse, so I drank a lot to kill the pain.

Finally, in 1995, a pro-life organization moved its offices right next door to the abortion clinic where I was working. I acted hatefully towards those people. But those people acted lovingly to me most of the time. One man did angrily accuse me at one point of being responsible for killing 40 million babies, but he later came to me and apologized for his words and said they were not motivated by love. The answer to the abortion problem is forgiveness, repentance, and love.

McCorvey was, to understate it, an unlikely pro-life activist.

But her own conversion on abortion gives hope that other Americans will follow in her footsteps.