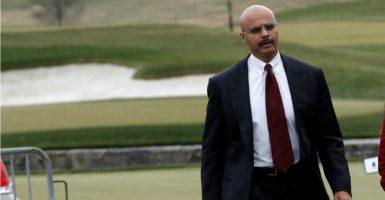 Peter Kirsanow, a member of the U.S. Civil Rights Commission, has spoken about the negative impact of illegal immigration on black Americans. (Photo: Mike Segar/Reuters/Newscom)

As the Trump administration gets ready to tackle illegal immigration, a member of the U.S. Civil Rights Commission noted the impact on the black community that he believes is too often ignored.

Kirsanow, an attorney in Cleveland and former member of the National Labor Relations Board, said illegal immigration is both a short-term and long-term problem for young black males.

“What happens is you eliminate the rungs on the ladder because a sizable number of black men don’t have access to entry-level jobs,” Kirsanow said. “It is not just the competition and the unemployment of blacks. It also depresses the wage levels.”

A U.S. Civil Rights Commission study in 2010 determined immigration had a disproportionate impact on black Americans, but the study didn’t distinguish illegal immigration from legal. The findings came through various field hearings with experts.

“About six in 10 adult black males have a high school diploma or less, and black men are disproportionately employed in the low-skilled labor market, where they are more likely to be in labor competition with immigrants,” the commission report says.

Illegal immigration to the United States in recent decades has tended to depress both wages and employment rates for low-skilled American citizens, a disproportionate number of whom are black men. Expert economic opinions concerning the negative effects range from modest to significant. Those panelists that found modest effects overall nonetheless found significant effects in industry sectors such as meatpacking and construction.

A 2012 Census Bureau report found more than half of American-born blacks did not continue their education beyond high school, while the rate was even higher for foreign-born Hispanics.

The NAACP, the nation’s leading black civil rights group, did not respond to The Daily Signal for this story. However, the organization has supported immigration reform that would provide legal status to illegal immigrants.

Moreover, an NAACP action alert cited research that increased immigration was actually helpful to the black community. After the Senate passed a 2013 amnesty bill, the group’s statement said:

Comprehensive immigration reform must focus on the basic American principles of preserving family unity, opposing wasteful spending, and protecting and promoting human and civil rights, human dignity, and fairness. It must also be very aware of the economic impact any new policies will have on the American people: that is why the NAACP was pleased to learn of studies which have found that more often than not, Latino immigrants and African-Americans fill complementary roles in the labor market. The study, by the Immigration Policy Center released in June of this year concludes that in metropolitan statistical areas, the increase of the Latino immigrant experience significantly raises wages, lowers unemployment, and elevates job creation for African-Americans.

The Immigration Policy Center is a research arm of the American Immigration Council, an immigrants’ rights advocacy group.

The Congressional Black Caucus also did not respond to inquiries from The Daily Signal. However, the group of African-American House members, all Democrats, has previously supported comprehensive immigration reform proposals, stating on its website:

Members of the Congressional Black Caucus unanimously support Comprehensive Immigration Reform legislation that provides a path to citizenship for millions of immigrants currently living in America and particularly for the more than 3 million immigrants of African descent.

Kirsanow contends that certain politicians and advocacy groups are more concerned with advancing the Democratic Party.

“Some people are putting party preference over the needs of their constituents,” he said. “The [Congressional Black Caucus] styles themselves as protecting and enhancing the interest of black Americans. The problem is that black workers are being ignored. So, there is another agenda at work.”