What Ruth Bader Ginsburg Gets Wrong About the Electoral College 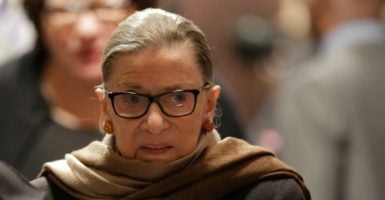 Since President Donald Trump defeated Hillary Clinton in the November presidential election without winning the popular vote, there have been almost unending calls from the left to eliminate the Electoral College.

When asked by a group of students what she would change about American society at a Stanford University lecture, Ginsburg responded, according to CNN, “There are some things I would like to change, one is the Electoral College.”

Ginsburg conceded that to change the Electoral College would require passing a constitutional amendment, which would be “powerfully hard to do.”

It is unfortunate that so many prominent Americans, including a Supreme Court justice and countless others, have questioned an electoral institution that has so effectively served the American people for over two centuries.

A Move Toward Majoritarianism

While Ginsburg wasn’t clear about how she would change the Electoral College, the most common suggestion to “fix” it has been to move toward a national popular vote selection process. The theory is that a more democratic system better reflects the people’s will.

This proposal would completely undermine the carefully constructed electoral process the Founding Fathers created at the Constitutional Convention and would further erode the essential concept of federalism that lies at the heart of the republic.

The Founders had a deep understanding of history. They knew that an unclear process of succession from one leader to another has often destroyed countries—it most certainly contributed to the downfall of the Roman Empire.

So, at the Constitutional Convention, the framers of our founding document constructed a system that produced over two centuries of peaceful transfers of power from one administration to the next—a near miraculous feat in human history littered with civil strife and broken political systems.

It would be foolish to abandon this remarkably stable process without first understanding why it was created.

It is often hard for modern Americans to accept the fact that our system of government was created to place limits on pure democracy.

For instance, an editor of the liberal media outlet ThinkProgress blasted the uneven nature of Senate representation to express frustration over the confirmation of Trump’s secretary of education, Betsy DeVos:

50 senators who supported her represent 143 millionhttps://t.co/uKP63Kntix

But to those who think that every vote should have equal weight and that only pure democracy is legitimate, the elections of George Washington and even Abraham Lincoln must be viewed as errors.

Washington’s elections were almost entirely undemocratic, and Lincoln won with less than 40 percent of the popular vote in 1860.

It’s clear through our nation’s history that we have been best served by the balanced system the Founders created.

Most of the Founders desired a presidential election process in which the states, acting in their separate capacities, would play a prominent role. Additionally, they feared giving too much power to bare majorities and “democracy,” which had frequently brought down great civilizations.

Few Founders seriously suggested choosing presidents through a national popular vote. Yet, there was still disagreement about what exactly this system would look like.

As Heritage Foundation legal expert Hans von Spakovsky noted in a paper on the Electoral College:

In creating the basic architecture of the American government, the Founders struggled to satisfy each state’s demand for greater representation while attempting to balance popular sovereignty against the risk posed to the minority from majoritarian rule.

Given that every state has two senators, regardless of population, the Electoral College was slightly skewed toward the smaller states.

This was intentional. The Founders sought to reduce the power of raw national majorities and, importantly, preserve a system that includes the diverse interests of Americans diffused throughout the states.

This became an essential factor in 2016 as many Rust Belt states that had previously voted Democratic for decades flipped to a Republican candidate.

Trump was better able to appeal to the specific interests of this region to secure a victory and create a sea change in the political map.

>>>Why the 2016 Election Proves America Needs the Electoral College

Without balancing out the power of large and small states, California, New York, and Texas would almost entirely determine all of our presidential elections. Our leaders would reflect the viewpoints and interests of the people who inhabit those narrow geographic regions with vast population centers.

Wild swings in policy based on temporary passions and majority tyranny were among the many potential catastrophes the Founders associated with pure democracy and that they desperately attempted to avoid.

While the Founders desired a system with a certain amount of democracy built in—a House of Representatives selected by popular votes within constrained to districts being the prime example—they aimed to restrain its potential pitfalls.

In fact, not a single election or issue in the United States is determined by a national plebiscite. The state-based, undemocratic structure of the Electoral College was meant to curb the maladies of an unconstrained mob much like most of our other institutions.

The Electoral College has become functionally more democratic over the years. The states universally conduct a popular vote to choose their electors rather than having the state legislature choose, as was done in earlier American history.

But most of the initial structure has remained unchanged.

Taken to its logical extreme, the idea that political legitimacy only comes through pure democracy would undermine our presidential elections, the Senate, and the almost entirely undemocratic Supreme Court that Ginsburg sits on.