These 5 Changes at the EPA Should Be No-Brainers 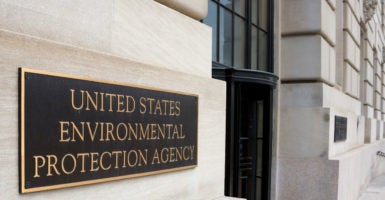 In 2016, a court ruled that the EPA failed to perform a legally required analysis of the impact that a regulatory proposal would have on U.S. employment. (Photo: iStock Photos)

The Environmental Protection Agency and many of its regulations are ripe for reform.

1. The EPA shouldn’t act unethically or break the law to promote its agenda.

The EPA shouldn’t behave like an activist group, and it certainly shouldn’t act unethically or illegally to push its agenda. But this is exactly what it did. The Government Accountability Office issued a ruling concluding that the EPA violated the law when pushing its controversial “Waters of the United States” rule.

As explained by The New York Times, “the Environmental Protection Agency engaged in ‘covert propaganda’ in violation of federal law when it blitzed social media to urge the general public to support President [Barack] Obama’s controversial [water] rule.”

2. The EPA shouldn’t mock the people it regulates.

Former EPA Administrator Gina McCarthy once dismissed legitimate public concerns about the proposed water rule as “ludicrous” and “silly.” It could hardly be said that this dismissive posture encouraged people from all perspectives to participate in the rulemaking process.

The message to those who had reservations about the proposal was clear: Don’t even bother expressing criticism, because we will either mock it or ignore it.

A 2011 NERA Consulting report examined numerous major Clean Air Act rules. From 2009 to 2011, there were six major rules in which the EPA didn’t identify any direct benefits (i.e. it didn’t find any benefits connected to achieving the actual purpose of the rule, such as reducing emissions of a specific pollutant).

Instead, the EPA has been justifying many clean air rules based on the incidental benefits of reducing fine particulate matter (also known as PM 2.5) emissions, something that is already regulated separately.

As explained by the U.S. Chamber of Commerce regarding major rules it examined:

Virtually all the benefits come from reductions of a single pollutant, PM2.5, which is often not even the pollutant that EPA cites as the justification for promulgating a regulation but, rather, a pollutant incidentally reduced by the primary regulatory requirements.

Under the Clean Air Act, Section 321(a), the EPA is required to “conduct continuing evaluations of potential loss or shifts of employment which may result from the administration or enforcement of the provision of [the Clean Air Act] … ”

The EPA has failed to perform this mandatory duty, as clearly explained in a 2016 district court opinion.

There are other environmental statutes with similar provisions that the EPA needs to follow as well: Section 507(e) of the Clean Water Act, Section 24 of the Toxic Substances Control Act, 7001(e) of the Solid Waste Disposal Act, and Section 110(e) of the Comprehensive Environmental Response, Compensation, and Liability Act (Superfund).

The EPA developed a report called the “Connectivity of Streams and Wetlands to Downstream Waters: A Review and Synthesis of the Scientific Evidence.” In January, 2015, the EPA announced the release of this final report in a fact sheet.

At the end of the document, it states:

Now final, this scientific report can be used to inform future policy and regulatory decisions, including the proposed Clean Water Rule being developed by EPA’s Office of Water and the U.S. Army Corps of Engineers. [Emphasis added.]

Here’s the problem: This scientific report was finalized after the proposed rule was published. It’s great that the EPA recognized the report should have informed the proposed rule. The problem is the EPA had no way to go back in time and actually do so.

As a result, the public ended up providing comments on a proposal that didn’t take into account the “scientific basis needed to clarify CWA jurisdiction,” as the EPA explained was a purpose of the report. The public wasn’t given a meaningful voice in the process.

Further, by not waiting for the final report before developing the proposed rule, the EPA made its policy decisions look like foregone conclusions (and maybe they were).

It shouldn’t be too much to ask for the EPA to follow the law, act ethically, and follow basic standards for developing regulations.