Women’s March Got Way More Media Coverage Than 2016 March for Life. This Coalition Wants to Change That. 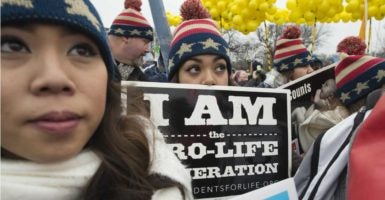 Pro-life activists take part in a March for Life rally in the District of Columbia. (Photo: Molly Riley/UPI/Newscom)

In response to the consistent lack of media coverage provided for the annual March for Life, the Alliance for Fair Coverage of Life Issues has announced its second annual #CoverTheMarch.

This campaign is designed to encourage the mainstream media to cover the yearly pro-life event that brings in tens of thousands of Americans who march in the District of Columbia to advocate for the unborn.

“This Friday is a true test for the media,” Brent Bozell, the president of the Media Research Center and a member of the Alliance for Fair Coverage of Life Issues, said in a statement. “They provided massive, and fawning coverage of the pro-abortion ‘Women’s March’ just four days ago. The media’s coverage of the ‘March for Life’ … both in time and tone, will tell you everything you need to know about their support for abortion.”

The group advocating media coverage on behalf of the March for Life, the Alliance for Fair Coverage of Life Issues, is made up of 25 pro-life organizations and two members of Congress. The coalition was formed in 2016.

This awareness campaign comes on the heels of primary news networks covering this month’s Women’s March on Washington 129 times more than last year’s March for Life, according to NewsBusters.

Specifically, during their morning and evening news shows, ABC, CBS, and NBC spent at least 1 hour, 15 minutes, and 18 seconds on the Women’s March. In comparison, they spent only 35 seconds total covering the 2016 March for Life.

The Women’s March, which called for “open access to safe, legal, affordable abortion and birth control for all people, regardless of income, location, or education,” in its Unity Principles, removed pro-life organizations as partners of the march.

“The annual March for Life is among the most consequential events organized in response to one of our most significant and ongoing cultural conversations. Will we continue to allow the victimization of our most vulnerable citizens or create a more just society in which unborn children are protected from the abortion industry?” Greg Scott, vice president of media communications at Alliance Defending Freedom, said in a statement.

“When nearly the entire media establishment essentially ignores the largest and longest-running gathering on such a critical issue,” he added, “it can only be seen as industry-wide journalistic malpractice.”

This year’s March for Life will take place less than a week after the Women’s March, on Friday, Jan. 27. This year is the 44th anniversary of the Supreme Court decision Roe v. Wade.