3 Things Trump Can Do to Control the National Debt 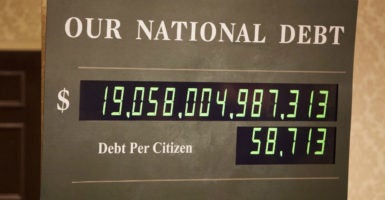 When President-elect Donald Trump enters office on Jan. 20, he will inherit almost $20 trillion of national debt. This debt is a threat to the American economy, and its key driver—unsustainable spending—must be controlled.

Come Jan. 20, the new administration should act immediately to tame the federal budget and reduce the national debt. Here are three solutions from The Heritage Foundation’s Blueprint Series that do just that.

Entitlement programs like Medicare, Medicaid, and Social Security make up the largest portion of the federal budget. In 2015, major entitlement programs consumed 52 percent of all tax dollars. They will grow to consume even more of the budget unless lawmakers intervene.

Currently, entitlement programs run on autopilot, meaning they don’t require new spending bills to keep running. Because of laws put in place years ago, agencies spend whatever is necessary each year to fund these programs, and it is politically unpopular for politicians to reform or downsize them.

The next administration should reform these unsustainable mandatory programs. Some commonsense solutions include repealing and replacing Obamacare, modernizing Medicare, capping the federal allotment for Medicaid, and making reforms to Social Security.

Entitlements Devour All Taxes by 2038 Persistent budget deficits allow the national debt to spiral out of control. For the last 50 years, the federal budget had an average deficit of 2.8 percent of gross domestic product, and the current Congressional Budget Office baseline projects that deficits will surpass $1 trillion before the end of the decade.

How to Balance the Budget The current process leads to higher government spending and debt. Since the most expensive programs, like Social Security, Medicare, and Medicaid grow on autopilot, and because they are also the most popular, politicians have little incentive to change them.

The next administration must enact budget process reforms that restore accountability and fiscal responsibility to the federal budget.

Commonsense budget process reforms such as fair value accounting, including interest in estimating the impact of congressional budget proposals, and statutory spending caps that limit spending growth enforced by sequestration, will help reform the budget process and get national debt under control.

How the Budget Has Changed Despite the lack of concrete current plans to control the debt, the next administration will have ample opportunity to tame the federal budget. Trump’s pick for Office of Management and Budget director, Rep. Mick Mulvaney, R-S.C., is a budget hawk who values fiscal conservatism.

The Congress is controlled by Republicans who have put forth sensible and realistic proposals to reduce out-of-control health spending with Medicare premium support and caps on federal Medicaid allotments. With the House, Senate, and executive all controlled by the same party, serious budget reform is within reach.

The incoming administration needs a plan to get spending and high national debt under control now, to ensure economic freedom and secure prosperity for Americans in the future.