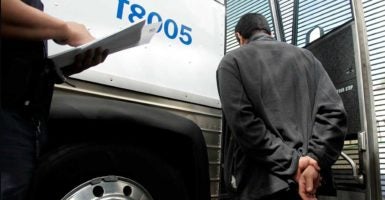 The Obama administration is using a taxpayer-funded program to award business grants to Salvadoran migrants deported from the United States.

Run by the nonprofit Instituto Salvadorno Del Migrante and funded through a $50,000 grant from the taxpayer-backed Inter-American Foundation, the program “facilitates [deportees’] reintegration into their communities and supports their enterprises by offering financial education, technical advice, and assistance with business plans.”

“So, if you break the rules and get deported, we’ll help you start a business back in your home country. How absurd,” said Sen. Rand Paul, R-Ky.

The program was included in a report on government waste by the Senate Homeland Security and Governmental Affairs Subcommittee on Federal Spending Oversight and Emergency Management, chaired by Paul.

The Inter-American Foundation sought to clarify that the Salvadoran grants are not “intended” for criminal deportees, but the subcommittee had no confirmation that criminal deportees are prohibited from receiving funds. No specific award criteria were provided.

“What we do know is that about 30 percent of the returning deportees were deported due to violent or other crimes beyond undocumented presence,” Paul stated.

Program supporters argue that negative impressions about deportees hamper their chances to get loans in El Salvador. That’s unfair, they said, given that most criminal deportees’ crimes involve “assault, drunk driving, and drug possession.”

To which Paul responded: “So while banks justifiably hesitate to take on such a risk, it is apparently perfectly reasonable to pass that risk on to the American taxpayer.”

Jessica Vaughn, policy analyst at the nonpartisan Center for Immigration Studies, said that while many things could go wrong, “It’s in our interest to ensure that people who are deported don’t turn around and come back again.”

“In concept, it may not be that bad of an idea,” she told Watchdog in an interview.

While asserting that border deterrence is “the only thing that will work in the long run,” Vaughn added, “People have to have a reason to stay in their country.”

But she shared Paul’s concerns about rewarding criminal immigrants, noting that the bulk of deportees in the Obama era were convicted of crimes in the U.S.

If and when border security is tightened, Vaughn said, “I can see a program like this when we get back to deporting people who are caught working and not necessarily criminals.”

This article was originally published by Watchdog.