Trump on Life, Conscience, and Religious Freedom in His Own Words 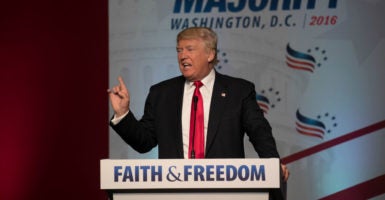 President-elect Donald Trump has made heartening promises to social conservatives, including that he will sign pro-life legislation and protect religious liberty. (Jeff Malet Photography/Newscom)

As my colleague Ryan T. Anderson and I have argued, it’s time to act to defend innocent human life and make religious freedom great again. President-elect Donald Trump has made encouraging statements regarding these important issues, including:

Trump has also pledged to rescind “every unconstitutional executive action, memorandum, and order issued by President [Barack] Obama” (Trump’s Contract with the American Voter). The Obama administration has aggressively pursued a radical agenda to unilaterally redefine “sex” to mean “gender identity,” which threatens freedom of conscience, privacy, and religious liberty.

While on the campaign trail, The Washington Post reported that Trump vowed to rescind the Obama administration’s transgender directives. This means that as president, Trump will:

Although Trump initially expressed some misgivings about North Carolina’s H.B. 2, which restored fundamental privacy norms to bathrooms in government and public school facilities, his more recent statements about North Carolina show that he believes states are in a better position to address these matters:

I’m going with the state. The state, they know what’s going on, they see what’s happening, and generally speaking, I’m with the state on things like this.

Instead of imposing a top-down policy on the entire country, Trump can ensure that the executive branch respects the principles of federalism and local control.

It’s not surprising that based on his various pledges, many Americans are excited about Trump’s prospects for defending life, conscience, and religious liberty. Men and women across the country will be closely following his actions in the months to come.