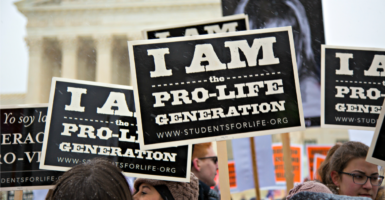 Thousands gather in Washington on Jan. 22 near the Supreme Court building during the 43rd annual March for Life. (Photo: Jeff Malet/Newscom)

In one of its final acts for a political constituency, the Obama administration issued a regulation Wednesday to block states from defunding Planned Parenthood, the nation’s largest abortion provider.

“There is a real chance of overturning Roe v. Wade,” a @March_for_Life VP says.

But pro-life activists expect the political environment to change rapidly in their favor after President-elect Donald Trump takes office Jan. 20.

Rep. Diane Black, R-Tenn., said pro-life majorities in the House and Senate will work with Trump in the new year to “roll back this latest overreach” and “enact new legal protections for these most vulnerable members of our society.”

Black also singled out Trump’s choice of a physician and pro-life lawmaker, Rep. Tom Price, R-Ga., to lead the Department of Health and Human Services. She said:

The Obama administration will not have the last word. With this new year comes renewed opportunity to fight for the dignity of every unborn child, the well-being of every struggling mother, and the conscience rights of every American taxpayer.

The Trump transition team is not yet committing to overturning the regulation designed to block states from denying public funds to Planned Parenthood clinics.

“We know our policy team is reviewing a number of different options to take on regulations and executive orders, but there is nothing final,” Trump transition team spokesman Jason Miller told The Daily Signal during a conference call with reporters Thursday.

However, the prospects of more pro-life judges, permanent restrictions on taxpayer-funded abortions, and a ban on abortion after 20 weeks excite pro-life activists as they await the Trump administration.

As a candidate, Trump told the Susan B. Anthony List that he would keep four commitments requested by the pro-life group: appoint acceptable Supreme Court justices, defund Planned Parenthood, push to make the Hyde Amendment permanent, and promote a ban on abortions after 20 weeks, when mounting evidence suggests unborn babies are capable of feeling pain.

The United States is one of only seven countries in the world that allows abortion after 20 weeks, according to a report by the Charlotte Lozier Institute, the research arm of the Susan B. Anthony List.

“A repeal-and-replace Obamacare [bill] must include conscience protections with no abortion mandates,” Marilyn Musgrave, vice president of government affairs for the SBA List, told The Daily Signal. “Making the Hyde Amendment permanent should mean [prohibiting] all subsidies, including tax credits.”

The Hyde Amendment, in effect since 1976 and named for the late Rep. Henry Hyde, R-Ill., prohibits the use of federal taxpayers’ money for abortion except in cases of rape or incest. Or when the mother’s life is at stake.

The appropriations rule generally has been a consistent policy rider attached to funding bills with bipartisan support, including lawmakers who support abortion. However, Congress has to enact the restriction each year. Pro-life leaders want the principle codified into law.

Beyond Trump, the political climate going into the 2018 midterm elections, when more Democrats face tough re-election fights, could provide opportunities for bipartisan support for pro-life legislation that is popular with the public, Musgrave said.

“Polls show that more and more women and millennials are pro-lifers because it’s no longer extreme to oppose taxpayer funding of abortions, or to oppose late-term abortion. It is certainly extreme to support those things,” said Musgrave, a former U.S. House member representing Colorado. “Even many who consider themselves pro-choice don’t believe taxpayers should fund it.”

We are deeply concerned about the future of health care access in this country with extremists like [Vice President-elect] Mike Pence and Tom Price at the helm. But we will not back down. We will continue to fight for our patients’ access to care. Every person deserves the right to control their own bodies, their own health, and their own well-being without politicians getting in the way.

Trump himself hasn’t been a consistent pro-lifer. During the campaign, he said the story of someone whose mother almost chose to abort deeply influenced him.

In 1999, before nixing a possible presidential run as a third-party candidate, Trump said abortion “is a personal decision that should be left to the women and their doctors.”

During an interview, he said he also opposed a ban on late-term abortion, but wrote in 2000 that he changed his mind after talking to doctors.

In 2011, when considering a presidential run as a Republican, Trump said: “I’m pro-life, but I changed my view a number of years ago.”

That’s why it will have to be “trust but verify,” said David Christensen, vice president of government affairs at the Family Research Council.

“The Trump campaign was involved in the Republican platform in July, which was one of the most pro-life platforms,” Christensen told The Daily Signal. “He said something that was almost unprecedented in the third debate [with Democratic nominee Hillary Clinton], promising a pro-life justice. We hope he makes good on that promise.”

Almost 60 percent of Trump voters agreed that the GOP platform’s “strong positions on unborn human life and religious liberty” played a role in their vote, according to a WPA Opinion Research poll sponsored by the Family Research Council.

The new regulation by the Department of Health and Human Services came after more than a dozen states barred Medicaid funds from from going to Planned Parenthood after the release last year of hidden-camera videos that appeared to show executives with the organization arranging to sell aborted body parts for profit.

Richards, the Planned Parenthood president, said the Obama regulation announced Wednesday “cemented his legacy as a champion of women’s health.”

The Obama administration’s new rule more accurately would be described as a temporary “parting gift” for Planned Parenthood, said Melanie Israel, research associate for the DeVos Center for Religion and Civil Society at The Heritage Foundation. Israel said:

The rule was proposed in response to over a dozen states attempting to shepherd public health funding away from abortion providers like Planned Parenthood and instead direct that funding to federally qualified health care centers that offer comprehensive health care to millions of uninsured, poor, and jobless Americans every year. The 115th Congress and the Trump administration will have the opportunity to ensure that this rule is quickly undone.

This is a historic opportunity for the pro-life movement, Israel said, noting that Ohio Gov. John Kasich, a Republican who also ran for president, signed a 20-week abortion ban Tuesday.

Kasich also vetoed a bill that would ban abortion when the unborn baby has a heartbeat, but Israel said she considers it a victory that Ohio became the 18th state to enact a 20-week abortion ban.

“We have pro-life majorities in the House, the Senate, and a pro-life president, and a lot of momentum in the states,” Israel told The Daily Signal. “Governor Kasich signing the pain-capable bill in Ohio is an encouraging sign for the pro-life movement and has given hope we can continue to promote a culture of life and have some victories.”

Congress will likely vote on several “messaging bills,” said Tom McClusky, vice president of government affairs for the annual March for Life, referring to legislation that couldn’t reach 60 votes in the Senate but would force lawmakers to go on the record with their positions.

These bills would include proposing a ban on sex-selective abortions and the Born-Alive Abortion Survivors Protection Act to require criminal fines or prison time and possible murder prosecution for abortionists that violate the law, McClusky told The Daily Signal.

“We have to educate the public, and once they recognize the humanity of the unborn child, you can try to walk them back to supporting a heartbeat bill,” McClusky said.

Trump is expected to move quickly to nominate a Supreme Court justice to fill the vacancy left by the late Justice Antonin Scalia. He potentially could name several other justices to the high court.

Referring to the Supreme Court ruling in 1973 that legalized abortion, McClusky said:

Regardless of the nominee, President Trump made the unprecedented statement of saying he will only name pro-life justices. That means there is a real chance of overturning Roe v. Wade. We are talking about 43 years of living under this travesty. Even if it takes another five to 10 years to reach the high court, that’s a shorter time frame than originally thought to overturn it.

Trump also could take action without Congress by choosing not to promote abortion abroad.

Musgrave said she is hopeful that Trump will reinstate the Mexico City Policy, which specifies that federal funds for family planning go only to foreign nongovernmental organizations that agree not to perform or promote abortion as a method of family planning in other countries.

It has been a pingpong issue between Republican and Democratic administrations. President Ronald Reagan put the policy in place in 1984. President Bill Clinton rescinded it in 1993. In 2001, President George W. Bush reinstated the policy. Then President Barack Obama overturned it in 2009.

Israel said Trump also should enforce the Weldon Amendment, which prevents states from unlawfully discriminating against health entities that refuse to pay for abortions.