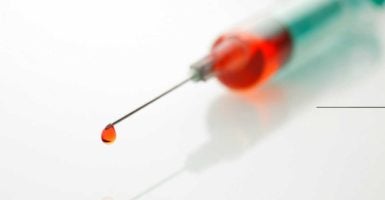 A doctor in the Netherlands euthanized an alcoholic man due to his addiction. (Photo: Caro / Ramesh Amruth/Newscom)

A man in the Netherlands died from euthanasia because of his addiction to alcohol, the man’s brother wrote in a Dutch account of the situation.

“I am just glad my brother did not have to jump in front of a train or live a few more years in agony before dying of his abuse,” Marcel Langedijk, the man’s brother, told The Independent.

According to the account from his brother, Mark “laughed, drank, smoked, ate ham and cheese sandwiches, and soup with meatballs” the day he died, The Independent reported.

Mark, 41, had two children and had previously been married.

“By the time Mark realized that he needed help, that he needed to talk to someone, it really was too late,” a Google translation into English of the Dutch account says.

Mark received 21 hospital or rehab admissions over eight years of getting help for his addiction. Due to the Netherlands’ euthanasia and physician-assisted suicide law that allows a person with “unbearable suffering with no prospect of improvement” to be euthanized, Mark’s solution to his addiction and request to die was granted.

“My brother suffered from depression and anxiety and tried to ‘cure’ it with alcohol,” Marcel Langedijk told The Independent. Marcel said his brother took the “humane” way out.

Marcel is writing a book on his brother’s alcoholism and death, BioEdge reported. Marcel’s account in Linda is a condensed version of the book, according to the Linda article.

The article says of the day Mark died:

“Alcoholism and depression are illnesses, just like cancer. People who suffer from it need a humane way out,” Marcel told The Independent.

Euthanasia has been legal for the terminally ill in the Netherlands since 2002. It was the first country to adopt such a law, according to The Independent. In an assisted suicide, a doctor may prescribe lethal drugs to kill a person, but for euthanasia, a doctor administers the euthanizing cause of death.

“Doctors should help their patients to die a dignified death of natural causes, not assist in killing,” Ryan Anderson, the William E. Simon Senior research fellow in American principles and public policy at The Heritage Foundation, wrote in 2015. “Physicians are always to care, never to kill.”

In Anderson’s research, he advocates that physician-assisted suicide “corrupts the profession of medicine by permitting the tools of healing to be used as techniques for killing.”

“Doctors often get it wrong when predicting how long terminally ill people have left to live, new research suggests,” The Independent reported in September.

The Netherlands plans to tack onto the country’s euthanasia law that a person can die if they deem their “life is completed,” LifeNews reported in October.

Heritage’s Anderson wrote in the Chicago Tribune earlier this year:

As for those physically or mentally unable to make an explicit request? The evidence from Europe is disconcerting. It shows that assisted suicide quickly leads to involuntary euthanasia.

Human euthanasia is illegal in the United States, but physician-assisted suicide is allowed in Oregon, Washington, Vermont, California, and is disputed in Montana.

In Colorado, voters passed an assisted suicide law in November. The law is expected to go into effect in late December.