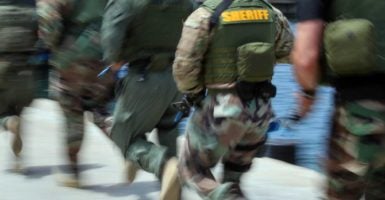 The Operation Phalanx border program was shut down by the Obama administration. (Photo: John Gastaldo/ZUMA Press/Newscom)

While surveillance helicopters were grounded in Texas, the head of Customs and Border Protection called the flights critical to “countering illegal immigration” from Mexico.

CBP Commissioner Gil Kerlikowske stated in a Nov. 16 letter that Phalanx “provided tangible benefits to border security.” His letter to the Department of Defense was sent two days before it was revealed that CBP’s parent agency, the Department of Homeland Security, had quietly halted border surveillance flights in Texas’ Laredo district.

According to apprehension and seizure records, Operation Phalanx logged 2,800 hours of flight time in the Rio Grande Valley and Laredo sectors since March. Another 1,000 flight hours were reported in the Tucson, Arizona, sector.

The surveillance flights were credited with apprehending 64,000 illegal border crossings in the Rio Grande sector and 25,000 in Laredo.

Another 21,000 apprehensions were attributed to Phalanx in the Tucson area.

Reports showed 217,000 pounds of marijuana were seized through Phalanx operations in the Tucson sector. The two Texas districts totaled a combined 89,000 pounds.

CBP says it is working with the Defense Department and National Guard units to resume the aerial surveillance program in 2017.

In his letter, Kerlikowske proposed directing 30 percent of Phalanx’s projected $55 million congressional appropriation to the Laredo sector, 20 percent to Tucson, and 25 percent to the Rio Grande Valley.

The remaining 25 percent would be earmarked for “surge operations in and around the Rio Grande Valley,” he stated.

Meantime, Phalanx staffers report that flights have been canceled in the Laredo sector for the remainder of this year. They say the disruption will add unnecessary contractual and manpower costs—if and when the program resumes.

A congressional source familiar with Phalanx called the program cost-effective because it leverages the training of National Guard crews. “CBP could not fill the [flight] hours if these helicopters come off the board,” the source said, speaking on condition of anonymity.

This article was originally published by Watchdog.org