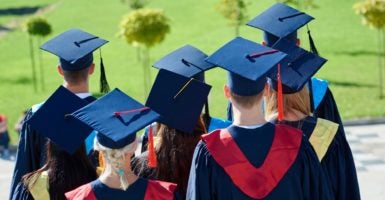 A new report makes clear that immigrants without a high school diploma, on average, generate substantial fiscal deficits, paying less in taxes than they receive in benefits in every scenario examined. (Photo: Ingram Publishing/Newscom)

Does current immigration economically benefit ordinary non-immigrants?  A recent major report indicates that most immigration does not.

In September, the National Academy of Sciences (NAS) published a major report on “The Economic and Fiscal Consequences of Immigration.” The report shows that, other than small number of scientifically educated immigrants, immigration produces little or no overall economic gain for non-immigrants but may cause a substantial shift in income from workers to business and capital owners.  Also, immigrants overall produce a fiscal deficit due to the very large inflow of legal and illegal immigrants with low education levels in recent decades.

So how did the researchers get to this conclusion? For starters, the report makes the perfectly obvious point that immigration increases the gross domestic product as it increases the number of workers. However, the pertinent question is not whether the GDP is larger but whether non-immigrant citizens are economically and financially better off because of immigration.

According to the report, an immigration surplus potentially exists because, as immigrants enter the labor force, wages decline and returns to capital (such as interest and profits)  increase by a slightly larger amount. As the report puts it, “the more wages decline, the larger the surplus.” At its maximum value, the theory implies that the current stock of immigrant labor, at 16.5 percent of the total labor force, has “lowered wages by 5.2 percent,” or roughly $500 billion, for non-immigrants, while raising the incomes of owners of business and capital by as much as $554.2 billion. The difference between the reduced wages and increased profits is “an immigration surplus of $54.2 billion, representing a 0.31 percent overall increase in income that accrues to the native population.” Thus the model shows that the main impact of immigration is to redistribute income. In other words, since businesses can pay workers  less, they make more of a profit.

However, as the report notes, the supply of capital may increase and the rate of return on capital will fall. This would mean the wage losses, capital income increases, and immigration surplus gradually disappear, and, in the long run, the situation would return to the status quoante.

The theory also predicts that a disproportionate inflow of immigrant laborers at a particular education or skill level will reduce the wage of workers in that group relative to others. For example, adult immigrants are almost four times as likely as non-immigrants to lack a high school diploma. This will result in persistently lower relative wages for less skilled workers, whether immigrant or not.

The report also states that immigrants with high levels of technical and scientific education spur technological innovation which may “increase productivity of natives, very likely raising economic growth per capita.” The number of patents produced is used as a proxy for technological change.

Immigrants with a college degree are twice as likely as U.S. born college graduates to obtain a patent. (This difference in patenting occurs because college educated immigrants are more likely to have degrees in science and technology than are college graduates born in the U.S.)  However, only 12.4 percent of recent immigrants have a STEM (science, technology, engineering or math) degree, and only one third of those are employed in a STEM occupation. Overall, only one percent of immigrants produce patents. Thus the overwhelming majority of the one million immigrants arriving in the U.S. each year are irrelevant to the technological change described in the National Academy of Sciences report.

Finally, the report examines the fiscal impact of immigration, considering eight different scenarios. In all scenarios, immigrants as a group are in fiscal deficit; the total federal, state, and local government benefits they receive are greater than the total taxes they pay, in both the first and second generations. The NAS report shatters any contention that immigration, as structured in recent decades, contributes to overall government solvency. The opposite is true.

The report makes clear that immigrants without a high school diploma, on average, generate substantial fiscal deficits, paying less in taxes than they receive in benefits in every scenario examined. By contrast, across all scenarios, immigrants with a college degree or more create a fiscal surplus.  Thus, the fiscal impact of immigration depends on the educational balance within the immigrant population.  Based on the report’s findings, both the economic and fiscal impact of immigration can be improved in the future by reducing the number of low skill immigrants and increasing the number of high skill immigrants.