Why the 2016 Election Proves America Needs the Electoral College 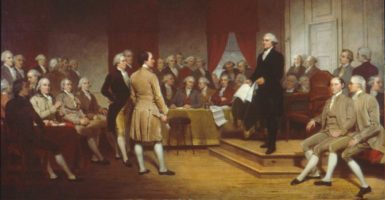 The Founding Fathers created the Electoral College in part because they wanted to preserve the power of the states. (Photo: Picture History/Newscom)

In the last week since Donald Trump defeated Hillary Clinton in a stunning electoral blowout, there have been calls from many on the left to abolish America’s unique presidential election system.

It still hasn’t been settled whether Trump or Clinton won the popular vote, but many Democrats are upset about the possibility that their candidate may have won more total votes, yet lost the election.

Progressives are taking aim at the Electoral College and want to replace it with a national popular vote. This would both remove the indirect mediation of the electors’ votes, and more damagingly, eliminate the power of states in choosing a president.

You can read my pre-election explanation of how the Electoral College works and why the Founding Fathers created it here. The 2016 presidential election is a perfect illustration of why America needs to keep this institution in place, regardless of whether one supported the winner or the loser in 2016.

The War on the Electoral College

A number of prominent people have called for abolishing the Electoral College, including President Barack Obama’s former attorney general Eric Holder, and former Democratic presidential candidate Michael Dukakis. And some of the media’s charges against the Electoral College have been hyperbolic.

One liberal professor called the Electoral College a “peculiar institution” and likened it to defending slavery, others simply labeled it racist, and one Slate writer denounced it as an “instrument of white supremacy—and sexism.”

Beyond the overheated rhetoric, detractors of the Electoral College have made two serious arguments.

First, that it’s simply unfair that a person can win the presidency without taking a majority of the national popular vote. Second, that an electoral emphasis on states as opposed to the people in an undifferentiated mass pushes candidates to only focus their attention on a few, closely contested “swing states.”

The ‘Fairness’ of the Electoral College

As designed in the Constitution, America’s presidential election is very much a product of the states—channeling the principle of “federalism” that the Founders cherished.

Smaller states receive a slightly higher number of votes compared to their population than more populous ones, which detractors of the Electoral College claim damages the idea of one man, one vote.

Many say this system is “unfair,” and that the total number of individual votes from all the states is a more accurate gauge for who the president should be. But, would it be fair for America’s chief executive to mostly be the product of a few urban centers in California, New York, and Texas?

The Electoral College system was designed to ensure that presidents would have to receive support from a diverse array of people around the country.

Modern candidates have to accommodate farmers in rural states, factory workers in industrial states, and software engineers in tech-dominated states. The president must consider the needs and opinions of people across the country instead of just the views of a few, highly populated urban centers.

The Electoral College ensures that the interests of “flyover country” in middle America cannot be ignored.

This was dramatically demonstrated in 2016. Trump drew the support of a huge number of states across the South and Midwest, while Clinton racked up massive majorities in the most populous states like New York and California.

Without an Electoral College, candidates would have little incentive to appeal to people outside the most urbanized, coastal states. Clinton was defeated because she couldn’t win over a majority of voters in the once Democrat-dominated Rust Belt that broke for Obama in the previous two elections.

The state results in the 2016 election also debunk the second major argument for abolishing the Electoral College: that candidates would only spend time campaigning in a few essential swing states.

Trump succeeded in defeating Clinton because he was able to pluck off a number of states—like Pennsylvania, Michigan, and Wisconsin—that had voted solidly Democrat for over a decade. This sudden shift is why Trump secured a surprise victory.

As author and Texas lawyer Tara Ross noted in a PragerU video, a state dominated by one party shifting to another is not a new phenomenon. California was a Republican stronghold until the late 1980s, and Texas used to be controlled entirely by Democrats.

Major electoral shifts have happened throughout American history, and will continue to do so as regions and political parties change. Demolishing the Electoral College should not be based on the outcome in a particular election.

Learn Why the Fence Was Built

The American system has had a remarkable success rate in transferring power from one presidential administration to the next.

This year, protestors unhappy with the election results have gathered in a few enclaves to denounce the president-elect. Some have even called for Democrat-dominated California to secede from the Union.

Yet, with the exception of 1860 (those secession threats were a little more serious than “#Calexit”), Americans have found a way to maintain an incredible record of political stability for over two centuries—in large part thanks to the Electoral College. It would be incredibly foolish to throw away that system for the sake of one side that didn’t get what it wanted this year.

The old adage that one should learn why a fence was built before tearing it down applies to our unique presidential election process. The rash call to dismantle the Electoral College that has been the model of stability over two centuries could do enormous damage to the United States.

Though the rules of the institution may seem strange, it is a carefully designed system conceived by the framers of the Constitution, and its opponents would do well to reflect on the reasons it was created before calling for its destruction.