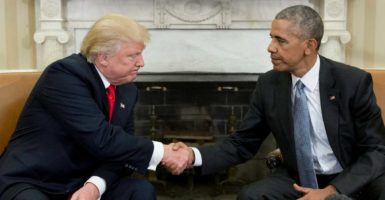 President-elect Donald Trump called President Barack Obama a “very good man” for whom he had “great respect,” and said he would continue to seek his “counsel” after the two met Thursday for more than an hour at the White House.

Trump has called Obama the “worst president in history,” while Obama said during the campaign that Trump was “unfit to serve as president.”

“The forceful case the president made reflected his sincere views,” Earnest said, but added that “the meeting was not to resolve the concerns raised on the campaign trail.”

Trump and Obama have been in a public feud since 2011, when Trump raised issues about Obama’s place of birth and Obama mocked him at the annual dinner of the White House Correspondents’ Association.

During the course of the presidential campaign, Obama repeatedly said Trump was not qualified to be president.

But the two were more than cordial in front of reporters after their meeting Thursday, as Obama ended a photo opportunity by saying, “We’re not taking any questions” as reporters shouted questions. Neither went into specifics about what they discussed.

“This was a meeting what was going to last for maybe 10 or 15 minutes,” Trump said. “We were just going to get to know each other. We had never met each other. I have great respect. The meeting lasted for almost an hour and a half. As far as I’m concerned, it could have lasted a lot longer.”

“I very much look forward to dealing with the president in the future, including counsel,” Trump said.

The president-elect added:  “Mr. President, it was a great honor being with you, and I look forward to being with you many, many more times in the future.”

Obama said the two talked about foreign and domestic policy.

“My number one priority in the coming two months is to try to facilitate a transition that ensures our president-elect is successful,” Obama said, adding:

I believe that it is important for all of us, regardless of party and regardless of political preferences, to now come together, work together, to deal with the many challenges that we face. … I want to emphasize to you, Mr. President-Elect, that we now are going to want to do everything we can to help you succeed—because if you succeed, then the country succeeds.