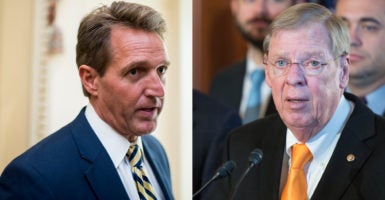 Sen. Johnny Isakson, R-Ga., predicted that Merrick Garland would be confirmed by the Senate during the lame-duck session of Congress. Sen. Jeff Flake, R-Ariz., has also advocated for action on Garland’s nomination in the post-election session.

“My prediction is this: If Hillary Clinton wins next Tuesday, Garland will be confirmed before January,” Isakson said Friday, according to The Huffington Post.

Isakson said he believes Garland would be a better alternative than potential Clinton nominees.

“He’s probably a lot more conservative than anybody she would appoint. If Donald Trump wins, there probably won’t be a confirmation of Merrick Garland,” Isakson said.

Garland, who currently is the chief judge of the U.S. Court of Appeals for the D.C. Circuit, was appointed by Obama in March to replace the late Justice Antonin Scalia, who died in February.

Isakson’s comments clash with statements made by fellow Republican senators, including GOP leaders who have ruled out confirmation during the lame-duck session.

“We’ve already made it very clear that a nomination for the Supreme Court by this president will not be filled this year,” Senate Majority Leader Mitch McConnell said in September.

Senate Majority Whip John Cornyn was even more blunt when asked by CNN about possibility: “No.”

In recent weeks, several Republican senators have suggested blocking Clinton’s nominees if she is elected president.

“I am going to do everything I can do to make sure four years from now, we still got an opening on the Supreme Court,” said Sen. Richard Burr, R-N.C., according to a recording obtained by CNN.

At a Colorado rally in October, Sen. Ted Cruz, R-Texas, told reporters that there is a historical precedent for the court operating with fewer than nine members.

“I think there will be plenty of time for debate on that issue,” Cruz said. “ … I would note, just recently, that Justice [Stephen] Breyer observed that the vacancy is not impacting the ability of the court to do its job. That’s a debate that we are going to have.”

During a radio interview in October, McCain said that Senate Republican leadership would “be united against any Supreme Court nominee that Hillary Clinton, if she were president, would put up.”

Similarly, Lee has said he believes there would be little difference between Garland and a potential Clinton nominee.

“As a former law clerk … I don’t believe there would be a real substantive distinction, a real noticeable difference between the voting pattern of a justice who would be appointed by a President Hillary Clinton … and Merrick Garland,” Lee told reporters in October.

Until Friday’s statement from Isakson, Flake was a lone voice advocating for lame-duck confirmation of Garland.

“I think the principle ought to be for Republicans to confirm the most conservative jurist that we’re able to confirm,” Flake told CNN’s Jake Tapper in September. “And if we do lose the election, then we ought to move swiftly, I think, to confirm Merrick Garland.”

Carrie Severino, chief counsel and policy director of the Judicial Crisis Network, said that supporting Garland would be detrimental to conservative values.

“Garland would provide the fifth vote to undermine First Amendment free speech and freedom of religion, to gut the Second Amendment right to bear arms, and to invite unelected agency bureaucrats, like those at the EPA, to micromanage every aspect of American life,” Severino told The Daily Signal in an email.

Ilya Shapiro, a fellow in constitutional studies at the libertarian Cato Institute, told The Daily Signal via email that it the distinction between a “moderate” and a “radical’ Supreme Court justice nominated by a Democrat president is not great.

“Justices appointed by Democratic presidents vote together north of 95 percent [of the time] on they key controversies that split the Court,” Shapiro said. “In that sense, it doesn’t matter whether the next nominee is a ‘moderate’ or ‘radical’ progressive. Moreover, on the issues that produce a heterodox split — typically the left/right ‘principled’ against the centrist ‘pragmatic’–a more [left-wing] nominee might be better. For example, Judge Garland inevitably defers to government interests in law enforcement cases, which Justice Scalia assuredly did not.”

“To preserve our cherished liberties and our constitutional system of government, both the executive and the legislative branches must engage in robust give and take about the kinds of men and women who ought to be confirmed to life-tenured positions in the judicial branch,” they wrote. “And senators have a sworn obligation to reject nominees who, they believe, would fail to uphold the Constitution.”