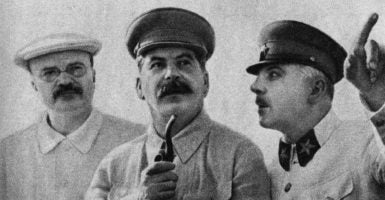 American education is failing thousands of students every year. But this crisis is not just about poor scores in math and reading. It is a deeper failure, leaving entire generations of Americans without the most basic knowledge of the country’s past and its civic institutions.

As The Daily Signal reported, the Victims of Communism Memorial Foundation’s first “Annual Report on U.S. Attitudes Towards Socialism” showed that just 42 percent of millennials view capitalism favorably compared to 64 percent of Americans over 65.

Perhaps more disturbingly, a third of millennials believe that more people were killed under former President George W. Bush than under notorious Soviet dictator Joseph Stalin, and just 37 percent of millennials had a “very unfavorable” view of communism.

These findings are merely the latest in a pattern of documented cluelessness on the part of the American population about history and civics—even among those with college degrees. This failure to teach citizens puts America’s future at risk and puts us out of step with the vision of the Founding Fathers.

In his advocacy for American education, Thomas Jefferson, author of the Declaration of Independence (for those who got the Stalin question wrong), wrote about the necessity of grounding young Americans in a solid base of knowledge about history, lest our republican form of government risk the rise of scheming demagogues and tyranny.

To Jefferson, the people were the ultimate guardians of their liberty—a tall order for those who remain completely in the dark about what liberty means or how it has been curtailed in the past. He wrote of the need to teach students history early in their lives, that “by apprizing them of the past will enable them to judge of the future; it will avail them of the experience of other times and nations; it will qualify them as judges of the ambitions and designs of men; it will enable them to know ambition under every disguise it may assume, and, knowing it, to defeat its views.”

It would be unfair to pin modern historical ignorance on the “stupidity” of millennials, who are generally entrepreneurial, and certainly tech savvy. There is certainly some blame to be shared by education institutions—K-12 and higher education alike.

Instead of merely lamenting the results of this tragic failure, concerned Americans can and should use the tools at their disposal to make things better for the next generations.

These programs have already produced some incredible results, but those who believe America needs to make a serious pivot toward a better civics education should look to growing freedom in the education sector as a way to reinvigorate civics.

“An education system that allows parents … to resolve the tensions between different visions of the purpose of education is key for America’s diverse republic.” —@InezFeltscher

For example, The Federalist author Joy Pullmann recently wrote about how a number of K-12 charter schools, which are publicly financed but privately run, have returned to focusing on a “classical education” for students. A Hillsdale College project called the Barney Charter School Initiative has founded 16 schools that focus on distributing “knowledge for and habits of self-government.”

As Pullmann noted, the purpose of these schools is to create an “academically coherent curriculum … that helps form a common culture and an attendant sense of national unity” that has not existed for generations.

Charter schools are not the only opportunity to improve civics education for young people. Innovative  education savings account programs, which give parents control over the money used for their child’s education may open up enormous opportunities for parents of all backgrounds to seek out the right situation for their child.

If states move toward a more universal education savings account  system, all parents will have the ability to seek out customized, quality education options, including civics and history courses. Imagine being able to pay for a history lesson being taught at a local university or on location at a historical site such as Gettysburg or Mount Vernon. Or, imagine, as education savings accounts allow, being able to hire a private tutor to teach a civics lesson, or to pay for on online history course.

Additionally, schools would have to compete for students and would have more pressure to give children a civics education their parents find satisfactory.

In an [education savings account] world, Hillsdale College, BJU Press [a source for Christian education materials], and college and career-ready standards would compete alongside dozens of other educational visions, from Howard Zinn’s ‘People’s History’ to hands-on learning to STEM-focused blended learning. An education system that allows parents, not politicians and bureaucrats, to resolve the tensions between different visions of the purpose of education is key for America’s diverse republic.

The depressing studies demonstrating rampant historical and civic illiteracy should provoke a sense of urgency rather than hopelessness. Future voters have a right to know what has gone before and we have the tools to make that happen, and parents should have the right to place their children in an educational environment that aligns with their values, civic and otherwise. The turnaround starts with educational choice.