Attacks From Left Drive Enterprise Out of Legislative Reform Group 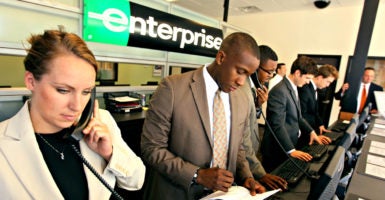 Enterprise Rent-A-Car's parent company has decided to speed away from ALEC, a network of state legislators and private sector leaders, after a monthlong campaign by labor, environmental, and other liberal groups. (Photo: David Carson/St. Louis Post-Dispatch/MCT /Newscom)

The car-rental giant Enterprise has capitulated to liberal pressure groups and withdrawn from a network of lawmakers, researchers, and business leaders that advocates limited government and free markets.

The decision by Enterprise Holdings Inc. to leave the American Legislative Exchange Council, or ALEC, follows a monthlong campaign conducted online and in social media by labor, environmental, and other left-leaning groups.

Referring to that pressure, Enterprise spokeswoman Laura Bryant told The Guardian newspaper Wednesday that “we have been carefully listening to those customers and partners who have expressed sincere concern about our ALEC membership.”

“In fact, after thoughtful consideration, we have decided to resign our membership,” Bryant said.

I think the most important thing here is to recognize that it isn’t so much of a capitulation on the part of Enterprise. They stood strong. They did good and fought the good fight. The reality is there is a sustained and large-scale campaign by the progressive outrage machine to silence the speech of companies, organizations, and individuals with whom they do not agree.

Enterprise worked with ALEC specifically on eliminating discriminatory excise taxes levied on rental car customers. That’s good for ALL people, including union members. The reality is, the unions want to bleed ALEC for completely different (POLITICAL) reasons, and will stop at nothing to do so.

Although Enterprise has made support for sustainable energy projects a part of its brand, ALEC’s foes accuse the organization of being a “denier” of man-made climate change. ALEC disputes that claim, but the groups pressuring Enterprise argued, sometimes in crude terms, that the car-rental giant was tainted by the association.

As The Daily Signal reported Sept. 12, opponents of ALEC orchestrated petitions, public criticism, and threats of boycotts after drawing attention to Enterprise’s association with the legislative organization through an Aug. 22 story in The Guardian, a liberal, U.K.-based newspaper.

The newspaper credited Nick Surgey, research director at the Center for Media and Democracy and an ardent foe of ALEC, for tipping the newspaper to Enterprise’s work with ALEC to oppose excise taxes on car rentals.

In the following weeks, as The Daily Signal reported, Enterprise responded on Twitter and Facebook that ALEC was only one of many allies and involved with Enterprise only in fighting such “discriminatory and unfair” taxes.

The Daily Signal sought comment from Enterprise, but did not receive a response before publication deadline.

In an email early Thursday, Politico Playbook reported this statement from Meierling, vice president for public affairs at ALEC, who said of Enterprise’s exit:

It’s true and unfortunate. They were forced to leave after sustained pressure. … It’s a clear campaign to marginalize, harass, and intimidate an effective organization of conservatives and get business out of policy. Washington, D.C., should be afraid of this new and clearly documented strategy.

Groups such as MoveOn.org, Climate Truth, Color of Change, and Stand Up to ALEC were part of the campaign conducted against Enterprise over Twitter, Facebook, and other social media platforms.

The last straw, Meierling indicated to Politico, came in “threats by unions to stop renting cars.”

A union of government workers, the American Federation of State, County and Municipal Employees, used Twitter and other digital tools to urge members to demand that Enterprise back away from ALEC.

ALEC’s Meierling previously told The Daily Signal that the description of the legislative exchange as a climate change “denier” isn’t accurate because “ALEC does not engage on the substance” of the issue.

“We do not believe in a renewable energy portfolio standards where the federal government mandates what the energy mix should be,” Meierling said, adding:

Virginia-based ALEC has more than 2,000 public members, all of them state legislators. It also counts more than 200 members from the private sector, including 28 companies and other organizations that joined in the past two years.

ALEC, founded in 1973, is a nonprofit, nonpartisan network of state lawmakers, policy analysts, and private sector leaders that advances model legislation with an eye toward policy solutions that limit government and encourage free markets.

In an interview with The Daily Signal’s Melissa Quinn published before news broke of Enterprise’s decision, Lisa Nelson, CEO of ALEC for the past two years, said one of her priorities has been to speak personally with leaders of member companies as the left’s attacks on ALEC escalated. Nelson said:

If business doesn’t stand up for itself in its right to engage in this debate and this dialogue, then they’re going to lose their ability to do that. It’s frustrating to see that a company could kind of lay down so easily.

Enterprise founder Jack Taylor, who started a car-leasing company in St. Louis in 1957 and built it into a rental empire, died July 2 at age 94. The Navy veteran named Enterprise after the USS Enterprise, the aircraft carrier on which he served in World War II.