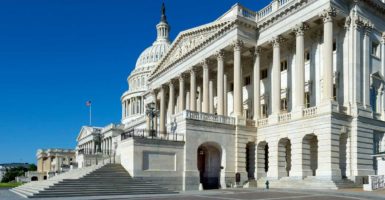 Over 100 conservative leaders call for “true accountability” and for Congress not to hold a lame-duck session after the November elections.

“Congress must not provide President Obama with an additional opportunity to enact his agenda of progressive social engineering programs and job-killing economic policies before he leaves office. A lame-duck session would be his swan song: He can be expected to leave no arm untwisted, no threat unmade, no quid un-quod, to get his dream-policies enacted, his liberal judges confirmed, and his international agreements approved,” states a memo from the Conservative Action Project, founded in 2008 by many conservative leaders.

A lame-duck session of Congress happens when Congress reconvenes after November elections to consider items of business. This occurs after the election of successors, but before the new term starts. This particular lame-duck session will also occur before a new president takes office.

The memo, dated Sept. 6, echoes an April message from the group calling on Senate Majority Leader Mitch McConnell, R-Ky., and House Speaker Paul Ryan, R-Wis., to take action and finish work for the year before the Nov. 8 presidential election.

“At a time when the American people’s trust in their government is near an all-time low, Congress should demonstrate exemplary behavior by completing its work before the November elections so that voters can judge all the legislators on the basis of the votes they have cast,” the memo states.

The memo says congressional action that requires elected official to vote is “essentially undemocratic” during a lame-duck session.

“The way to get good representation is by having the opportunity to hold those officials accountable,” the signatories write.

In 2008, a lame-duck Congress passed 12 public laws and in 2012 to 2013, Congress reconvened to confront expiring spending and tax policies, according to research from The Heritage Foundation. In 2014, a lame-duck session reconvened to fund government programs.

“The frequency of lame ducks during the modern era tracks closely with the rise in polarization and the erosion of regular order,” The Heritage Foundation research says. The research continues to say:

Without facing the accountability of voters, both parties have taken up contentious pieces of legislation and nominations. … But rather than work through issues as part of the normal legislative year, recent Congresses have resorted to lame-duck sessions where there is less incentive for members to represent their constituents.