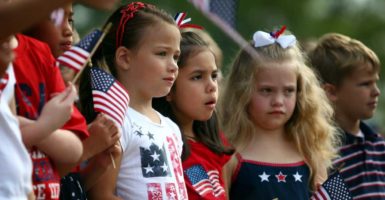 A Florida elementary school sent students home with a waiver from reciting the Pledge of Allegiance. (Photo: Nikki Boertman/Zuma Press/Newscom)

Can America thrive as a post-patriotic society?

A Florida elementary school recently caused a stir on social media when a man posted an image of his niece’s waiver from reciting the Pledge of Allegiance. The waiver form asked parents if they would like to opt their child out from “standing and placing his/her right hand over his/her heart” and reciting the pledge.

The infuriated uncle wrote on Facebook, “My niece brought this home from school today…What is happening to our country?!?”

Florida students have been able to opt out of the pledge since 2000.

The just over 30-word Pledge of Allegiance, written by Francis Bellamy in 1892, received an addendum of “under God” in the 1950s under President Dwight Eisenhower, but has remained a fairly constant and little-changed staple at schools and public gatherings for over half a century. While the specific merits of the pledge have elicited opposition on the left and right over the decades, the casual and increasingly dismissive treatment of even simple patriotic acts is a symptom of deeper trends in American society.

The decline of patriotism in American life will lead to profound crisis for the world’s youngest civilization—which has been fortunate enough to maintain one of the oldest, and certainly the greatest, of political systems.

A June Gallup poll indicated that only 53 percent of adults are “extremely proud” to be Americans, a 17 percent decline since 2003. The numbers were dragged down in particular by millennials; only 34 percent of adults under the age of 30 reported being “extremely proud” to be citizens of the United States. These steadily declining numbers, more than economic malaise or any other factor, demonstrate the current fragility unity of the world’s greatest superpower.

In spite of recessions, economic setbacks, and widespread government dependency, Americans remain a dynamic and entrepreneurial people at heart. But these factors alone aren’t alleviating the fact that most Americans believe the country is on the wrong track, fueling the current populist mood of the nation.

The great French observer of American life, Alexis de Tocqueville, warned that “ … epochs sometimes occur in the life of a nation when the old customs of a people are changed, public morality is destroyed, religious belief shaken, and the spell of tradition broken.”

Tocqueville ominously wrote that the country in such a state:

… assumes a dim and dubious shape in the eyes of the citizens; they no longer behold it in the soil which they inhabit, for that soil is to them an inanimate clod; nor in the usages of their forefathers, which they have learned to regard as a debasing yoke; nor in religion, for of that they doubt; nor in the laws, which do not originate in their own authority; nor in the legislator, whom they fear and despise. The country is lost to their senses; they can discover it neither under its own nor under borrowed features, and they retire into a narrow and unenlightened selfishness.

The decline in true or even symbolic patriotism is especially bad news for a country like the United States.

The blending of disparate races, ethnicities, and religions into a lasting national identity has been one of the greatest and historically rarest triumphs of this country. Americans have traditionally embraced displays of patriotism to a degree that astounds and occasionally disturbs citizens of other countries. But it has been necessary for a civilization that has brought together so many diverse peoples under one flag.

The long-term American cultural project of assimilation is fraying and its decline could open up the cleavages that exist under the country’s surface. For most of the world, “nationalism” has symbolized ethnic identity more than love of country—in the wake of quickly declining patriotism, this will likely become the norm in the U.S. as well.

When using the phrase “land of opportunity” is labeled a “micro-aggression” by universities, and most students fail a basic civic literacy test, it is no wonder young Americans have little attachment to their country. They may learn that their only true ties are to the subgroups their leftist professors imbue with such importance, rather than to all of their fellow Americans.

While the trendy notion of being a “citizen of the world” is popular in Western, cosmopolitan societies, in a globalized world in which communities have broken down, individuals fall back on tribe or look to radical mass movements to fulfill this sense of loss.

The flippant way in which patriotism is being cast aside in this country makes it vital that Americans attempt to restore patriotic sentiment and understanding of the nation’s traditions for current and future generations. Leaders capable of articulating what has made America unique are necessary, as is a public that has a keen understanding of what ideas are at the cornerstone of the republic.

South Carolina’s new law requiring students to study the founding documents is one of many ways civic and patriotic attachment to country can be restored—and similar laws could at least provide a baseline for responsible citizenship.

In an 1894 speech, Theodore Roosevelt spoke of the need for “true Americanism” for the U.S. to be a great country. He said:

We shall never be successful over the dangers that confront us; we shall never achieve true greatness, nor reach the lofty ideal which the founders and preservers of our mighty Federal Republic have set before us, unless we are Americans in heart and soul, in spirit and purpose, keenly alive to the responsibility implied in the very name of American, and proud beyond measure of the glorious privilege of bearing it.

If the trends continue and America proceeds down the path of being a post-patriotic society, no election or economic boom will put the country back on the right track or restore sagging confidence in the country’s political institutions.

Patriotism and pride in the U.S.’ unique institutions and founding principles has been the glue holding together a country diverse in ethnic backgrounds and creeds. Without allegiance to the American experiment, we may find that our citizens choose ethnic ties or “global citizenship” as more meaningful than their hollowed out and meaningless American identity.