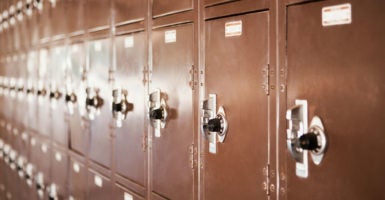 To allow boys in the girls’ showers, bathrooms, and locker rooms takes away the privacy of the girls in those spaces. To allow girls in the boys’ bathrooms likewise robs boys of privacy. (Photo: Spaces Blend Images /Newscom)

The Charlotte-Mecklenburg school system recently announced a new “anti-bullying policy” that flagrantly violates the law as well as common sense. According to materials used by the school system to train faculty and administrators, the policy requires the following:

Charlotte-Mecklenburg Superintendent Ann Clark said that their new anti-bullying policy was based on “clear guidance” from a 4th U.S. Circuit Court of Appeals decision requiring a Virginia school system to allow a girl who identifies as a boy access to the boys’ bathroom.

In that case, the 4th Circuit agreed with President Barack Obama’s Justice Department’s interpretation that the protections against “sex” discrimination in the law known as Title IX include “gender identity.” However, a stay of the case issued by the U.S. Supreme Court caused the Charlotte-Mecklenburg school system to temporarily suspend the part of its policy dealing with restrooms and changing facilities. The rest of the policy is set to go into effect when school starts later this month.

Rather than helping children with gender dysphoria accept and appreciate their bodies, the school system is actively pushing rejection of their bodies.

A closer look reveals that the danger in this policy is bigger than it may seem. Rather than helping children with gender dysphoria accept and appreciate their bodies, the school system is actively pushing rejection of their bodies. Not only is the Charlotte-Mecklenburg district encouraging confused and fluid adolescent desires, it is and mandating everyone else conform to their perspective regardless of biological reality.

The school system is deliberately deceiving parents because its policy is intended to advance a social agenda that will indoctrinate their children; compromise their privacy, dignity, and safety; and rob them of their innocence in the process.

There is no doubt the district is expanding its policy based on a bad North Carolina anti-bullying law passed in 2009 covering “sexual orientation,” “gender identity,” and “gender expression.”

In fact, in 2015, the Charlotte-Mecklenburg school system received a grant funded by the Centers for Disease Control and Prevention from the state’s Department of Public Instruction for the purpose of implementing “safe and supportive environments for lesbian, gay, bisexual and transgender youth.” The completed work will be distributed to 15 priority school systems as well as “serve as a resource to all [school systems] across the state.”

It is clear that the new “anti-bullying” policy adopted by the district is in truth a model LGBT policy for the rest of the state. What better way to indoctrinate the masses to believe that there is no difference between boys and girls than to force them to share showers, bathrooms, homecoming crowns, sex ed classes, hotel rooms on overnight field trips, and sports teams?

There is no medical or scientific data to back up the claim that “transition” for gender confused children should be encouraged or protected by school policies.

In fact, there is a lot of scientific evidence questioning whether it is even possible to change one’s gender or sex. Like the Diagnostic and Statistical Manual of Mental Disorders, the American College of Pediatricians says transgenderism is a mental illness but differs by saying that encouraging transition as treatment is actually child abuse.

Further, accepting transgender identity in childhood often results in hormone therapy to delay or impede puberty to be followed by irreversible surgery and a lifetime of psychotherapy to deal with psychological problems for the individuals involved.

This new policy violates the rights to privacy, free speech, and free religious exercise of all students and faculty.

According to the Charlotte-Mecklenburg district policy and the Obama Justice Department’s interpretation of Title IX, no medical proof is required to document gender dysphoria nor is there a requirement of demonstrated behavior for a particular length of time to qualify for full “transgender rights.” No, students need only proclaim that they feel like the sex opposite their biology, and everybody in the school must fall in line. Although these feelings can change, the policies nevertheless require schools to allow “gender-fluid” kids to explore new gender identities.

Besides harming our children, this new policy violates the rights to privacy, free speech, and free religious exercise of all students and faculty. To allow boys in the girls’ showers, bathrooms, and locker rooms takes away the privacy of the girls in those spaces. To allow girls in the boys’ bathrooms likewise robs boys of privacy.

A recent Centers for Disease Control and Prevention study indicated that “as many as 1 out of 4 girls and 1 out of 6 boys will experience some form of sexual abuse before the age of 18,” some of which is perpetrated by other students. Since bathrooms are one of the top places for sexual assault in America, why would our schools’ administrators want to grant opportunity for more abuse?

And to force students and teachers to call a student a certain pronoun like “Ze” or “Ne,” or any one of 60 invented genderless pronouns, is forced speech.

Ultimately, the end result of such policies will mean the end of girls’ sports. Imagine the injustice if Title IX, which was passed to give girls a fair opportunity in education and athletics, is actually used to destroy girls’ sports and hurt their academic opportunity. After all, if obvious and relevant biological differences cannot be used to make distinctions for purposes of bathrooms and showers, there should be no difference in the ladies’ tee box and the men’s tee box on the golf course and no differentiation of their team members.

Finally, the Charlotte-Mecklenburg school system policy violates the constitutionally protected liberty of parents to supervise the upbringing, education, and care of their own children, especially when they don’t even have the right to be informed about their child’s gender confusion. The only way the district can pull this off is to shut the parents out.

Following a rally outside the Charlotte-Mecklenburg school system school board meeting in Charlotte, a man posted a message saying:

As a gay father of two daughters ages 5 and 6, I am furious to think that CMS has the right to enforce these rules. Gender identity and sexuality are not the responsibility of CMS, it is the sole responsibility of the guardians. Children, or adults for that matter, do not need to use a bathroom with another person in order to validate their identity or sexuality.

It is outrageous that the Charlotte-Mecklenburg school system would arrogantly declare that it can take the parents’ place.

At that rally, a Hispanic leader pointed out that the U.S. is already ranked a dismal 14th in education on the world stage. She said, “This policy puts an additional burden on teachers, who are already overwhelmed with discipline problems, to teach our kids about romantic attractions and gender confusion. We should be teaching our kids how to compete on the world stage, but instead, we’re teaching them about the gender unicorn.”

You heard that correctly: the Gender Unicorn. A cute, purple, mythical unicorn with a strand of DNA covering its genitals was designed as a slick marketing tool to teach faculty about the “new genders.” School today is no longer about teaching reading, writing, and arithmetic; it’s about teaching “gender fluidity” and political correctness. Parents can pull their children out of the school system, which many in Charlotte have already done because of the district’s failure in other areas.

The lasting solution is to increase funding for voucher programs, such as North Carolina’s opportunity scholarships, to provide parents real choice.

Offering parents true choices for public education, private schools, and home-school so they can decide where their children attend school will make school boards like Charlotte’s more responsive to parents’ concerns. Market economics will drive whether school boards veer off course to push radical social agendas like the Gender Unicorn at the expense of academic excellence.