One of America’s Greatest Patriots Passes Away at 94 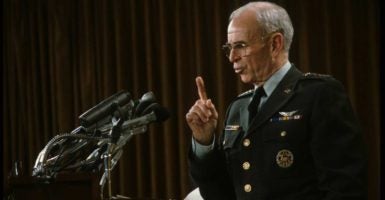 According to Ronald Reagan, Gen. John W. Vessey “presided over the restoration of military strength and power at a moment critical to the fate and freedom and his country’s security.” (Photo: Dennis Brack/Newscom)

Former Chairman of the Joint Chiefs of Staff, Gen. John W. Vessey Jr., passed away on Thursday evening, leaving behind three children and a legacy of service.

Vessey enlisted in the Army National Guard in 1939 when he was only 16 years old ,and over the course of a distinguished 46-year military career, progressed to the rank of a four-star general.

Vessey’s early career as a field artillery officer was marked by service in two wars: World War II and Vietnam. His combat experiences were intense.

In 1944 Vessey went ashore in the landings at Anzio in Italy, where he was awarded a battlefield commission. Twenty-three years later Vessey was wounded defending a firebase in Vietnam that was in danger of being overrun by the Viet Cong.

In March 1982, President Ronald Reagan nominated Vessey to become the next chairman of the Joint Chiefs of Staff. His nomination surprised many at the time as the selection was generally made from among the military service chiefs. Vessey, then Vice Chief of Staff of the Army, validated Reagan’s decision.

During his time as chairman of the Joint Chiefs, he oversaw the military buildup under the Reagan administration, reinvigorated NATO, and brought the discussion of missile defense to the public stage. According to Reagan, Vessey “presided over the restoration of military strength and power at a moment critical to the fate and freedom and his country’s security.”

By the time of his retirement in 1985, Vessey was the longest-serving active duty members of the military. Throughout his service, he never lost his humility.

At Vessey’s retirement ceremony, Reagan lauded Vessey’s leadership, describing him as a man who “always remembered the soldiers in the ranks; he understood those soldiers are the backbone of any army. He noticed them, spoke to them, looked out for them. Jack Vessey never forgot what it was like to be an enlisted man, to be just a GI.”

Even after his retirement in 1985, General Vessey continued to serve our country and our troops. At Reagan’s request, Vessey returned to Vietnam to resolve the fate of U.S. service members missing in action and bring peace to their families.

The nation lost one of its greatest patriots last week, but we will never forget his legacy and service.