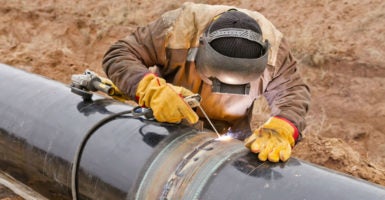 The July jobs report shows the weak May report was an aberration and the economy continues to strengthen. (Photo: iStock Photos)

Strong growth in the professional and business services (+70,000), health care (+49,000), leisure and hospitality (+45,000), and government (+30,000) sectors lead the way. (One exception was the mining sector, which shed another 7,000 jobs—primarily because lower energy prices have reduced investment in domestic energy production.)

The household survey showed some good news. The unemployment rate remained constant at 4.9 percent. Although hundreds of thousands of Americans entered the labor force, most found jobs. As a result, both the labor force participation rate and the employment-to-population ratio increased by 0.1 percentage points.

The report did sound one sour note: long-term unemployment worsened. The average duration of unemployment rose slightly to 28.1 weeks, just over six and a half months.

This may explain why polls find Americans more pessimistic about the economy than the headline statistics suggest they would be. One in four workers who lose their jobs take a very long time to find new work.

Nonetheless, the jobs report provides encouraging news. It shows the weak May report was an aberration and the economy continues to strengthen. It also suggests the Brexit vote has had little negative effect on the U.S.