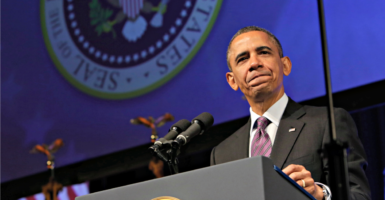 Barack Obama, on April 26, 2013, became the first president to speak at a gathering of Planned Parenthood, the nation’s largest abortion provider. But the White House hasn't backed the plank in the Democratic Party platform calling for taxpayer-funded abortions. (Photo: Chris Kleponis/DPA/Picture Alliance/Newscom)

Although Barack Obama has been staunchly pro-choice during his presidency, the White House this week cited a “longstanding view” that doesn’t support federal taxpayer funding of abortions—a change embraced at the Democratic National Convention as part of the party’s platform.

“I don’t believe we have changed our position on the Hyde Amendment, but if we do, you’ll be the first to know,” White House deputy press secretary Eric Schultz told The Daily Signal on Tuesday.

The Hyde Amendment, in effect since 1976 and named for the late Rep. Henry Hyde, R-Ill., prohibits the use of federal money for abortion except in cases of rape, incest, or when the mother’s life is at stake.

The congressional appropriations rule generally has been a consistent “policy rider” on funding bills that has bipartisan support, including from lawmakers who support abortion.

The Democratic Party’s move was unprecedented in the wake of previous platforms that called for abortion to be “safe, legal, and rare.”

Obama signed an executive order in 2010 to apply the Hyde Amendment to Obamacare, so that he could secure needed votes from moderate Democrats to pass the health care law.

Last year, the White House spoke out against attempts to defund Planned Parenthood by explaining federal funds generally could not be used to pay for abortion.

“We have a longstanding view on this, and I don’t have any changes in our position to announce today,” Schultz told The Daily Signal.

The poll also found that 45 percent of pro-choice Americans oppose taxpayer-funded abortion, as do 65 percent of African-Americans and 61 percent of Latinos. Fully 44 percent of Democrats oppose federal funding of abortion.