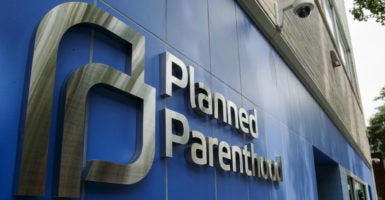 “Being the person being yelled at, that was hard," Dakota Pearl, a woman who watched the Planned Parenthood virtual video at the DNC, says. "I think a lot of times, you don’t really think about that. When there’s a protest going on, people are angry at something bigger.” (Photo: Lucas Jackson /Reuters/Newscom)

PHILADELPHIA—Steps outside a women’s caucus meeting at the Democratic National Convention, Planned Parenthood’s lobbying arm got techy with attendees, using computer-generated imagery to give people a firsthand look at the protests some women face when walking into abortion clinics.

“Planned Parenthood Action Fund is here sharing a virtual reality film called ‘Across the Line,’ which puts people inside the experience of what it’s like to cross the line of anti-abortion protesters who stand outside abortion clinics to bully and intimidate patients and staff as they walk inside,” Kristen Tilley, an official at Planned Parenthood Action Fund, told The Daily Signal.

The 7-minute video is comprised of three scenes, and requires viewers to wear a pair of headphones and specially equipped Samsung goggles.

According to Tilley, the first scene is scripted, depicting a doctor and patient discussing the abortion process inside a clinic room. The patient, who in real life was a former Planned Parenthood patient, is heard discussing with her doctor what it was like passing through the picket line. The second scene uses real documentary footage of a protest that happened last fall mixed in with the same actors, Planned Parenthood Action Fund officials said, and the third scene uses computer-generated imagery to depict a virtual protest. Planned Parenthood then overlaid those graphics with real audio from protests across the country.

In the video, pro-life protesters are heard calling women “whores,” telling them to close their legs, referencing Bible verses, and asking “who’s going to stand up for the rights of the child?”

“We have taken this really brand new technology of virtual reality with the age-old art of storytelling,” Tilley said, “to share the experience of what far too many people go through just to access the basic reproductive health care, but really, especially abortion.”

Dakota Pearl, a 24-year-old woman from Orlando, Florida, watched the 7-minute virtual video and said she was deeply moved by what she saw.

“It’s just really sad,” Pearl said, in a search for words. “Being the person being yelled at, that was hard. I think a lot of times, you don’t really think about that. When there’s a protest going on, people are angry at something bigger.”

The goal of the video, Planned Parenthood Action Fund officials said, is to show people what it’s like walking in a woman’s shoes as she passes protest lines to get an abortion so they might change their minds about the procedure and the stigma surrounding it.

“A virtual reality presentation on abortion at the Democratic National Convention by the nation’s number one abortion provider provides little actual reality about a procedure that harms both women and their unborn children,” Kristi Hamrick, spokeswoman for Americans United for Life, told The Daily Signal in an email.

“The real reality of Planned Parenthood is that it is a business funded in large part by taxpayers and through the sale of abortions. The sad reality is that many women suffer when they believe the sales pitch of an industry committed to ending life,” Hamrick said.

As it relates to what people are seeing in this virtual contraption, women deserve to be treated with dignity, love, and respect at every moment, and especially when they are facing an unexpected pregnancy and considering an abortion. There are more than 2,000 pregnancy resource centers serving women in their communities across the country. … I don’t condone the shouting or the name-calling, and I think that that is ineffective and certainly a rarity when you compare it to what I know to be true of the pro-life movement. A woman watches a 7-minute video that gives people a firsthand look at the protests some women face when walking into abortion clinics.

Although the majority of people outside the Democratic National Committee Women’s Caucus were friendly to the abortion issue, several people The Daily Signal interviewed who watched the video said they doubted it could really change minds.

“Too short, too little of a window because the people who are just fixed with believing in [life] aren’t ever going to give the world that right in their own mind,” Steven Levine, 59, of Worcester, Massachusetts, said. “They’re just too much into wanting to preach from a God that they’re not even too sure of themselves—but a lot of good made-up Bible thumping.”

Amy Simon, a middle-aged woman from West Orange, New Jersey, and her friend sitting next to her who asked to remain anonymous, simultaneously said “no,” they don’t think the effort would sway anyone’s opinion on the abortion issue.

However, both women said they believed it could benefit the pro-choice movement in a smaller, more targeted way.

“It might change the way [pro-life protesters] approach somebody, which makes a huge difference,” Simon said. “So perhaps, it could add some sensitivity to the fact that we all have a right to our beliefs, we can disagree, and I’m going to still tell you what I think but maybe I won’t be as strong and rude and condescending.”

“Other than that I don’t think it will change anything, unfortunately,” she added.

Planned Parenthood has faced an onslaught of attacks by Republicans over the past year, after the pro-life group Center for Medical Progress released a series of undercover videos depicting Planned Parenthood officials haggling over the price of fetal tissue and body parts from aborted babies.

Those videos triggered calls to defund the organization of its taxpayer dollars and sparked investigations into whether abortion clinics and middleman tissue procurement companies are profiting off these transactions.

Republicans in charge of those investigations say documents they’ve obtained strongly suggest that abortion clinics and middleman procurement companies are profiting off these transactions in direct violation of federal law. Planned Parenthood Federation of America consistently has denied any wrongdoing and was cleared in multiple state investigations so far.

David Daleiden, the founder of the Center for Medical Progress, faced his own investigation after secretly recording lunch meetings and other conversations with Planned Parenthood and other officials in regards to the fetal tissue market.

On Thursday, as people outside the Democratic National Committee’s Women’s Caucus watched Planned Parenthood’s new virtual reality show play out, a Texas judge dismissed the last of the remaining charges against Daleiden and his colleague Sandra Merritt.

This report has been expanded to include comments from two pro-life organizations, contributed by Leah Jessen in Washington.