How Other Nations Stop US From Deporting Criminal Illegal Immigrants 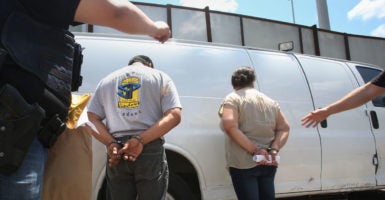 Thousands of illegal immigrants with criminal convictions have been released from custody because they can’t be repatriated to their home countries. (Photo: Peggy Peattie/ZUMA Press/Newscom)

Susanna Ruth Makinson can blame a lot of things for why her then-husband was shot dead eight years ago while patrolling the streets of Fort Myers, Florida, the first time since 1930 a police officer had been gunned down in the city.

That’s because, in a distant way out of her—and his—control, Andrew Widman’s death felt preventable; his killer, Abel Arango, was an illegal immigrant and convicted felon who was released from detention because his native Cuba wouldn’t take him back.

But though Makinson wishes the government would do more to fix this little-known problem in the immigration system, to do more to pressure uncooperative countries to accept their citizens who are here illegally and commit crimes, she also has gained a lifetime of perspective raising three kids without their father.

“It’s a huge problem that criminals take advantage of; most people don’t know it’s possible for the originating country to decline the person being deported,” Makinson told The Daily Signal in an interview. “It bothers me. At the same time, what if I had been sick that day and my husband hadn’t gone to work? I would go crazy thinking through every ‘what if’ scenario. I try not to do that. We don’t live in a perfect world.” Andrew Widman of the Fort Myers Police Department was killed in the line of duty in July 2008. (Photo: Courtesy of Susanna Ruth Makinson)

Pressure to Do More

Yet in 2016, the inability to deport criminals continues to frustrate lawmakers, advocates of tougher immigration laws, and families who’ve been victimized by violent offenders.

According to Immigration and Customs Enforcement (ICE), an agency of the Department of Homeland Security, thousands of illegal immigrants with criminal convictions have been released from custody—some who’ve committed crimes like assault and murder—because they can’t be repatriated.

As of May, ICE classified 23 countries, including China, Afghanistan, Iraq, Iran, and Libya, as being “recalcitrant,” or uncooperative.

That lists also still includes Cuba, a country with which the Obama administration restored diplomatic relations with last year after five decades of hostility.

“We shouldn’t allow other countries to dictate who will be deported from the United States,” said Jessica Vaughan of the Center for Immigration Studies. “The Obama administration has been passive on this and not used the tools Congress has given them to address this problem.” Deporting illegal immigrants is more complex than simply sending them on a plane home.

If the native country refuses to issue those papers, the U.S. cannot deport people there.

But critics say the government can be more aggressive in using diplomatic leverage to pressure countries to comply.

Under immigration law, the State Department can deny visas to citizens of countries that refuse to repatriate their nationals.

The government is reluctant to use this authority, however. A State Department official told The Daily Signal that the government has refused to issue visas to only one nation, in 2001 against the South American nation of Guyana.

“Visa restrictions are not imposed lightly,” the State Department official said. “For many years, we have worked with DHS [Department of Homeland Security] to review the status of each recalcitrant country on a case-by-case basis. We engage at the highest levels to resolve these issues diplomatically when possible, while remaining ready to invoke visa restrictions, as warranted, in consultation with DHS.”

“The Department of Homeland Security and the State Department together have an effective tool to discourage this behavior, and it’s high time they use it,” Grassley told The Daily Signal in an emailed statement. “No other American family should have to endure a tragedy because criminal immigrants are allowed to stay in this country, even if foreign countries won’t take responsibility.”

“No other American family should have to endure a tragedy because criminal immigrants are allowed to stay in this country” says @ChuckGrassley.

In addition, Sen. Richard Blumenthal, D-Conn., plans to introduce legislation to sanction countries that won’t take back their citizens.

One of the most egregious crimes occurred in Blumenthal’s state. Last month, Jean Jacques, an illegal immigrant from Haiti, was sentenced to 60 years in prison for murdering Casey Chadwick, a 25-year-old woman from Norwich, Connecticut.

Jacques, 41, had a previous attempted murder conviction and should have been deported, but Haiti would not take him back because they said he could not prove he was a citizen.

The government faces a number of challenges in deporting illegal immigrants who commit crimes here.

A 2001 Supreme Court decision, Zadvydas v. Davis, said that the government cannot indefinitely detain an immigrant just because that person’s country of origin declines to accept his repatriation. If the immigrant cannot be deported after six months, they must be released from custody. However, according to ICE, immigration authorities can hold immigrants longer in a “very narrow category of cases involving special circumstances, including certain terrorist [activities] and dangerous individuals with violent criminal histories.”

But immigration officials argue the legal standard for keeping an immigrant in detention for that reason is tough to meet.

“The Supreme Court’s Zadvydas decision has required ICE to release thousands of dangerous individuals,” said ICE Deputy Director Daniel Ragsdale in testimony before Congress this month. “Sadly, ICE records indicate a number of these aliens have gone on to commit additional crimes while in the United States.”

Despite the hurdles, ICE and the State Department claim to be making progress.

In fiscal year 2015, Ragsdale told Congress, ICE was able to remove convicted criminals to 10 countries, including Uganda and Sudan, which did not previously accept its citizens back.

The State Department and ICE are pursuing other avenues to push countries to cooperate.

An ICE official told The Daily Signal that the agency has sent 125 letters this fiscal year to nation’s embassies in the U.S. seeking cooperation in the deportation process. The official said ICE has issued more of these letters this year than in any other year.

Also, before resorting to visa sanctions, the government can recall a recalcitrant country’s ambassador to the U.S. for a meeting.

Despite these efforts at improvement, uncooperative nations continue to contribute to a glaring weakness in the U.S. immigration system, leading to tragic consequences.

Makinson, the then-wife of Widman, the murdered Fort Myers police officer, cannot be the agent of change people may want her to be.

Now 37 years old and remarried, Makinson is consumed with raising the three kids she had with Widman, in a place far away from Fort Myers, in Franklin, North Carolina.

It would have been too hard to remain in a city where her deceased husband’s legacy literally exists—the street outside the Fort Myers police station was renamed Widman Way. But Makinson still holds dear her relationship with Widman, which began when the couple met at Toccoa Falls Bible College in Toledo, Ohio.

It was there that Widman studied to become a missionary, before he was later attracted to the service of law enforcement.

“He was very community minded,” Makinson said. “He wasn’t in police work because he wanted to prove something. He really want to help people and impact their lives, and he thought this was a good way.”

Widman had been at the police department less than year—and patrolling his own car for even less time than that—when he was called to patrol downtown Fort Myers in the early morning hours of a muggy July night in 2008.

The clubs and bars were letting out when Widman intervened on a verbal argument between Arango, the Haitian immigrant, and a woman. Arango shot Widman, 30, from close range in the face, killing him instantly.

Widman’s surviving children, Samuel, Sasha, and Sylvia, carry his last name, they know his story, and will carry it on.

“The conversations about Andy [Widman] never stop,” Makinson said. “This is their history, this is their life and it always will be. It’s helped them to be free to talk about him and ask me questions—anything from, ‘I don’t like carrots; did dad like carrots?’ To my son asking me what his voice sounds like, and I tell him it sounds like his dad.”

Samuel, the oldest, was only 4 when Widman was killed. He shares his father’s spiritual, thoughtful demeanor, Makinson says.

The children refer to Makinson’s new husband, Jonathan, as “dad.” Their biological father has his own special title. “We talk about him as ‘dad in heaven,’” Makinson said.

Makinson is trying to fulfill her own life, and her children’s lives, as best she can, while preserving meaning from Widman’s.

“The most courageous thing I’ve ever done with my entire life is moving to participate in life and be a real person for my children after Andy’s death,” Makinson said. “But I’m still hoping that Andy’s story can be a catalyst for change, and if we can get that immigration loophole closed, I hope it can save other lives.”