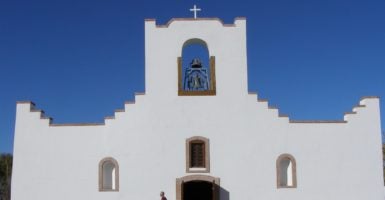 The House Oversight and Government Reform Committee held a hearing Tuesday on one of the most important pieces of religious liberty legislation before Congress in years: the First Amendment Defense Act (FADA), introduced by Sen. Mike Lee, R-Utah, and Rep. Raúl Labrador, R-Idaho.

Several Democratic House members and their invited witnesses made some stunning claims about the bill both orally and in written remarks that merit serious fact-checking. Here are six of them.

Myth 1: The bill is cover for discrimination against LGBT people.

Reality: This claim is rebutted by simply stating what the bill actually does—it prevents the federal government from discriminating against individuals and institutions that follow their beliefs about marriage and what it entails. It protects supporters of both sides of the same-sex marriage debate from being stripped of nonprofit tax-exempt status, licenses, grants, contracts, or accreditation. Just as Congress protected people from being punished for declining to participate in abortions after Roe v. Wade, the First Amendment Defense Act protects people from being punished for their beliefs about marriage after the Obergefell decision, without taking anything away from anyone.

Myth 2: FADA prevents enforcement of every single federal law that imposes a “penalty”—be it antidiscrimination, health, retirement, or housing—for noncompliance if the person being penalized can claim they are acting out of a belief about marriage.

Reality: The word penalty appears only once in FADA and in a paragraph dealing exclusively with taxation because FADA only prevents discriminatory imposition of tax penalties, not every penalty in federal law. Most of the criticisms of FADA, including the most fantastical ones, vanish once this is understood.

Reality: The previous response applies with equal force here as FADA provides no immunity or exemptions from the Family and Medical Leave Act or any employment civil rights laws. As illustrated by the Hobby Lobby decision at the Supreme Court, business owners should not be forced by government to give up their religious beliefs and convictions in order to earn a living. FADA furthers this important right by protecting businesses in limited contexts—such as grants, contracts, tax exemption, and licenses—while leaving our landmark civil rights laws untouched.

Reality: FADA does not cover state government employees, so state clerks are not protected. Kelvin Cochran testified at the hearing about being unjustly fired from his position as Atlanta fire chief because of his views on marriage, and how FADA would have protected him had it been the federal government stripping him of his position as United States fire administrator. His story prompted former Rep. (and FADA opponent) Barney Frank to say that he wished there were a law that would have protected the chief. Frank is right: There should be such a law and FADA is it at the federal level.

Myth 5: Under FADA, federal contractors would be able to deny certain government-funded benefits under Title X, such as contraception, to a person because they enter into a same-sex marriage.

Reality: FADA opponents have been forced to imagine outlandish hypothetical scenarios like these because they cannot come up with real world examples where FADA would prevent gays and lesbians from getting government services everyone is entitled to. FADA specifies that for-profit contractors cannot deny services to anyone required to be served under the terms of a federal contract. Additionally, where protection is provided, as with religious nonprofits, FADA does not relieve the federal government of any obligation to deliver government benefit or services “either directly or through a person not seeking protection under this act.” In short, everyone entitled to a government benefit or service will get it before and after FADA.

Myth 6: Under FADA, a hospital could deny visitation rights to people in same sex-marriages.

Reality: FADA states that it does not apply to any “hospital, clinic, hospice, nursing home, or other medical or residential custodial facility with respect to visitation, recognition of a designated representative for health care decision-making, or refusal to provide medical treatment necessary to cure an illness or injury,” (emphasis added). It doesn’t get any clearer.

The Supreme Court itself said that the belief in marriage as the union of one man and one woman is grounded in “decent and honorable religious or philosophical premises,” not on discrimination. FADA respects this truth and gives life to the best of our traditions of tolerance and religious freedom.

Tuesday’s hearing proved that FADA protects people and institutions from having their beliefs about marriage targeted for discrimination by their own government. It would do nothing more, nothing less.

This piece has been modified since publication.