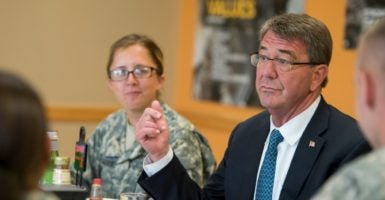 On Thursday, Secretary of Defense Ash Carter announced that the U.S. military is dropping its policy of treating male and female troops according to their biology—to be replaced by a policy based on a radical new gender ideology.

This change was not precipitated by military needs but by political correctness. After all, the military is not stretched so thin that it must make special accommodations to help attract the estimated 0.6 percent of Americans who self-identify as transgender in order to effectively fight and win our wars.

Moreover, people with gender dysphoria are allowed to serve, and many have served honorably, so long as their condition or treatments do not interfere with combat readiness.

What the military did not allow before today was the disruption to morale, privacy, and readiness that results from a male serviceman demanding the “right” to dress as a female, have others address him as a female, and be granted unfettered access to showers, lockers, bathrooms, and barracks designated for females. That commonsense policy, which has served our country well, was jettisoned today.

In grappling with this issue it helps to ask why the military has separate shower facilities and barracks for women and men in the first place. As with the question of women in combat, if the answer has something to do with biological realities, privacy, and interactions between the sexes, then the implications for morale and readiness are fairly evident.

But the new gender ideology ignores these facts and replaces them with subjective self-identification, so that a person’s sex is merely an arbitrary designation “assigned at birth” and one can actually be “male, female, neither, or a combination of male and female,” at least according to new mandates from the Obama administration.

Some obvious questions arise from the new policy. Will biological males who identify as female be subject to physical fitness requirements for men or women? Will they be required to do 35 pushups or 13 pushups to pass basic training? Will American taxpayers be required to pay for expensive “sex reassignment” surgeries, including breast implants in men and shaving down Adam’s apples when that money can be spent on better weapons or more training?

Will service members who have addressed an officer as “sir” for years be booted out of the military if they refuse to address him as “ma’am?” Wouldn’t the loss and impact on recruiting offset any supposed gains of allowing a relatively few transgender troops the ability to dress according to their chosen identity? These are but a few questions Carter neglected to address in his announcement.

Instead, Carter said that:

This is too much.

First, it doesn’t violate equality to recognize relevant biological realities and there is nothing in the text, structure, or history of the Constitution that elevates transgender people to a protected class akin to race.

Second, whatever one thinks of the latest Supreme Court redefinition of marriage, it did not redefine what it means to be a man and a woman for all Americans, especially in the military context.

There are painstakingly detailed regulations concerning uniforms, grooming, and even tattoo placement because troops must be trained to put the mission above self-expression, as lives depend upon it. Regulations that recognize relevant biological realities help, not hinder, the mission, and as admitted by Carter in his statement, thousands of people with gender dysphoria were already allowed to serve over the years because they respected the old policies.

Finally, there are hundreds of thousands of veterans and current troops who were traumatized, wounded, or died fighting against Nazis, Communist aggressors, and terrorists, yet, believe that biological men should not be allowed into the same barracks and showers as women.