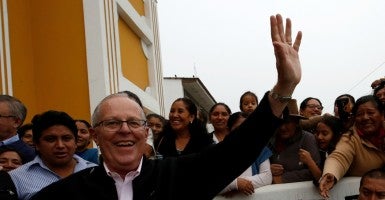 Peru’s leftist parties—defeated in the first round of voting—threw their support to the center-right PPK in the run-off as “the lesser evil” over Fujimori, according to The Economist. Her father is now in prison for corruption and human-rights-abuses committed during his 1990-2000 presidency.

Fujimori’s campaign was also damaged by a “late-breaking scandal” alleging links between her Popular Force party and narco-traffickers.

As the Wall Street Journal reported, President-elect Kuczynski wasted no time in calling for “Latin America’s leaders to increase pressure on Venezuela to uphold rights for political opponents and address an economic crisis that has led to shortages of basic goods there.” This is a welcome signal to send in advance of the June 23 special meeting on human rights in Venezuela at the Washington-based Organization of American States.

Argentina’s President Mauricio Macri came out “strongly against Venezuela’s rights abuses soon after taking office in December” but has since disappointed conservatives by taking weaker positions in advance of the OAS debate.

The Washington Post notes that Peru has been on “a steady course of centrist, free-market policies and a prolonged boom of foreign investment and exports that have elevated the country of 30 million into the ranks of Latin America’s most successful economies, along with Chile, Mexico and Colombia.”

As The Heritage Foundation’s annual Index of Economic Freedom documents, “Peru’s economic competitiveness has been sustained by regulatory reforms,” relatively prudent macroeconomic and monetary management, and “a structural fiscal rule keeping the level of public debt among the lowest in the region.”

Still, PPK will confront a majority of Fujimori supporters in the Peruvian congress. And, as the Index observes, he will need to continue the work of his predecessors to strengthen the country’s institutions, better-protect property rights, improve the judicial system, and address other key structural deficiencies that undercut productivity growth such as a complex tax regime and a rigid labor market.

Despite his age, PPK is vigorous, energetic, and doggedly determined to keep Peru and, to the extent he is able, all of Latin America on a course away from the destructive populist past and towards the prosperity that accompanies well-functioning free-market democracy.