Disability Advocates React to ‘Me Before You’: ‘Our Suicides’ Are ‘Tragedies’ 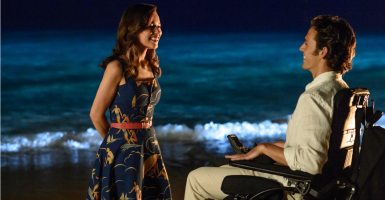 Will Traynor, played by Sam Claflin, became quadriplegic after a traffic accident in the movie "Me Before You." (Photo: LILO/SIPA/Newscom)

The lead, disabled character in the newly released movie “Me Before You” chooses to end his life, leaving the newfound love of his life instructions to “live boldly” and encourages her to live well.

“‘Me Before You’ literally romanticizes a death wish,” Tom Shakely, executive director of the Terri Schiavo Life & Hope Network, told The Daily Signal. “And it romanticizes Dignitas, a Swiss death clinic that, if it were offering its lethal drugs to prison inmates, would be universally condemned for its lack of a hopeful approach to remediate personal challenge and suffering.”

“Me Before You” is an adaptation of Jojo Moyes’s fictional book by the same name. In the film, Will Traynor, played by Sam Claflin, became quadriplegic after a traffic accident. The movie depicts 30-some-year-old Traynor confined to a wheelchair, paralyzed from the chest down. Traynor, despite the wishes of his mother and his caretaker (turned very special friend) Louisa “Lou” Clark, played by Emilia Clarke, decides to go through with his intention to die.

“The film asks and answers its own question in the affirmative: Wouldn’t life be better if you were dead?” Shakely said. “This is fatalism as raw material, and if we let romanticism about a foreign death clinic influence our notion of human rights, we’ll have created a much darker world than the one we were born into. Does it feel right to treat suicide as medical care?”

Pro-life activist Stephanie Gray wrote about the book on her blog:

When she [Louisa] learns that the parents have agreed to assist Will in his suicide in 6 months’ time, she quits because she doesn’t want to be part of killing. …Then she decides to return to work, realizing she can spend the next few months trying to make Will’s life as incredible as possible so he doesn’t choose suicide. …Then she takes Will on a life-creating and spirit-building vacation and tells him she wants to devote her life to loving and serving him, but he refuses saying he still plans to commit suicide, so she cuts him off in a decision to remove herself from the killing. …But then it all goes downhill.

“Almost every single character caves,” Gray wrote. “They all encourage, facilitate, or are actually present at Will’s suicide the way he wants it.”

The one character in the movie who does not “cave,” Louisa’s mother, encouraged her daughter not to be present when Traynor dies. Lou did not listen to her mother.

John Kelly is the New England regional director of Not Dead Yet, a disability rights group that opposes legalization of assisted suicide. He has the same level of spinal cord injury as Traynor’s character, but said that he and other quadriplegics are better off alive than dead.

“Book and screenplay author JoJo Moyes admits she knows nothing about quadriplegics, yet her ignorance is allowed to promote the idea that people like me are better off dead,” Kelly said in a press release. “We are not ‘burdens’ whose best option is to commit suicide. No one’s suicide should be treated noble and inspirational. We reject this discrimination. Our suicides should be viewed as tragedies like anyone else’s.”

Ben Mattlin, who was born with spinal muscular atrophy, wrote in an op-ed for the Chicago Tribune:

Make no mistake: Quadriplegia is hard, and it can be tempting to give up. Like Will Traynor, the paralyzed heartthrob in the movie (played by nondisabled actor Sam Claflin), I rely on constant assistance from paid aides and family members. It’s nearly impossible to find a job, let alone a restaurant or store without steps or with an accessible restroom. It’s a good thing I’m positively bursting with self-confidence and know I do want my life to continue. But how many of those who are struggling to maintain self-esteem, who feel unsure of their right to exist, possess the courage and sheer chutzpah to withstand the invidious message that they’re better off dead?

Disability advocates and anti-euthanasia groups have criticized, protested, and urged their supporters to boycott the film, released for a general audience in the United States on June 3.

“Our society places a high value on physical appearance and ability and at the same time really stigmatizes significant disability,” Kelly Buckland, executive director of the National Council on Independent Living, said in a press release. Buckland is a spinal cord injured husband and father.

“We understand what it means to deal with issues like the loss of one’s former dreams as well as the loss of physical abilities,” Buckland said. “When someone is first hit with this, they may spend time feeling that they’d be better off dead. If assisted suicide had been legal in the past, many of us would not be here today.”

“We need people to distinguish between euthanasia, which is illegal throughout the U.S., and medical aid in dying, which is available in Oregon and four other states,” Charmaine Manansala, political director for Compassion & Choices, an organization that advocates for medical aid in dying, said in a statement provided to The Daily Signal. Manansala has been living with multiple sclerosis for 15 years. Manansala added:

Medical aid in dying is not for people with disabilities—unless they are also terminally ill. I myself live with MS and I wouldn’t be advocating for aid-in-dying laws if they were for people like Will Traynor’s character in ‘Me Before You.’

Katie Driscoll, president of Changing the Face of Beauty, an organization that aims to empower people with disability by advocating for inclusive imagery, brings up another point.

“Media has such a strong influential voice on the perceptions of our society and this movie seems to communicate that people with disabilities are a burden,” Driscoll told The Daily Signal. “I would definitely rather see more positive examples of the disability community in entertainment, but to be honest, the biggest concern I have is the casting of an able-bodied actor portraying a character who is paralyzed. There are so few roles available to the disability community, why wasn’t this role given to an actor who is paralyzed?”