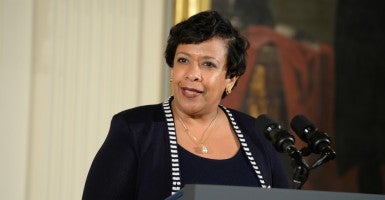 If U.S. Attorney General Loretta Lynch fails to respond to this letter or fails to act, it will be another sign of how this administration— and this Justice Department—are willing to interject ideology and politics into their prosecutorial decisions. (Photo: Christy Bowe/Polaris/Newscom)

On Thursday, five U.S. senators sent a letter to Attorney General Loretta Lynch demanding that she stop using Justice Department “law enforcement resources to stifle private debate on one of the most controversial public issues of our time—climate change.”

Sen. Sheldon Whitehouse, D-R.I., was pressing Lynch to criminally investigate anyone who refuses to accept man-induced climate change as an unassailable fact.

The response of the chief law enforcement official of the United States should have been that it is the duty of the Justice Department to fairly enforce the law in a dispassionate, non-ideological manner based on facts, not to investigate those who hold disfavored views regarding scientific controversies and an unproven scientific theory.

Instead, to the senators’ “astonishment,” Lynch said that the “matter has been discussed” and she had “referred it to the FBI to consider whether or not it meets the criteria for what we could take action on.”

The senators also refer to a “coalition of environmentalists and lawmakers” who asked the Justice Department in 2015 to investigate a “private sector company” over its views on climate change for violating the Racketeer Influenced and Corrupt Organizations Act.

This is the 1970s-era law that was passed by Congress to target mob organizations. And they express their concern over the actions by certain state attorneys general to go after other private parties, including subpoenaing universities, scientists, and nonprofit organizations for all of their research and communications on climate change.

The Competitive Enterprise Institute is one of the think tanks that was subpoenaed by the Virgin Islands attorney general, Claude Walker, for all of its research.

Walker apparently delegated his prosecutorial authority to a well-known plaintiffs’ firm, Cohen Milstein, which he hired to handle his investigation. Just recently, Walker decided to withdraw the subpoena after the Competitive Enterprise Institute put up fierce opposition to complying with it and Walker received widespread criticism for his behavior, including questions raised by the attorneys general of Texas and Alabama about the contingency fee arrangement Walker has with the law firm.

Such an arrangement raises grave due process and conflict of interest concerns because it gives private attorneys that represent the government “a financial stake in the outcome.”

As the senators note, all of these actions “provide disturbing confirmation that government officials at all levels are threatening to wield the sword of law enforcement to silence debate on climate change.” The senators say that is “a blatant violation of the First Amendment and an abuse of power that rises to the level of prosecutorial misconduct.” The Justice Department should not be issuing “intrusive demands targeting individuals who represent the parts of civil society that are most dependent on free inquiry and debate.”

The senators then request that Lynch confirm within 14 days that the Justice Department:

Additionally, the senators ask Lynch to “explain what steps you are taking as the federal official charged with protecting the civil rights of American citizens to prevent state law enforcement officers from unconstitutionally harassing private entities or individuals simply for disagreeing with the prevailing climate change orthodoxy.”

This is a final shot across Lynch’s bow. Not only are these senators demanding that she refrain from having the U.S. Justice Department apply the RICO law to First Amendment-protected speech, they want to know what she is going to do to stop state attorneys general from similarly exercising their governmental authority to interfere with Americans’ exercise of their First Amendment rights.

If Lynch fails to respond to this letter or fails to act, it will be another sign of how this administration—and this Justice Department—are willing to interject ideology and politics into their prosecutorial decisions.