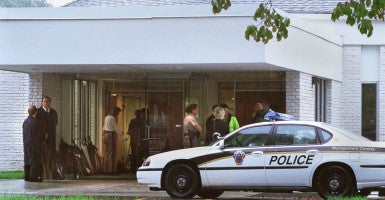 The Montgomery County Police Department is known for its emphasis on embracing diversity and establishing relationships with people of different faiths. (Photo: The Washington Times/ZUMAPRESS/Newscom)

As a Muslim with a dream to be a police officer, Sharif Hidayat stood out in the Jesuit high school he attended in Maryland’s Montgomery County.

Because of his unique identity, Hidayat is a natural to build relationships with Montgomery County’s Muslims, which hasn’t always been easy for the police department.

At a time when Muslims, and police officers, are facing scrutiny, Montgomery County is a place that strives to be one community.

And Hidayat is on the front lines of that effort.

Though Muslims in Montgomery County — who represent roughly 10 percent of the county’s more than 1 million people — are well integrated, community leaders are trying to make that success sustainable.

Three years ago, a Montgomery County resident, Hedieh Mirahmadi, who is Muslim, launched a community-led program to prevent extremist violence.

The “Montgomery County model,” as the program is called, is operated under a partnership between Mirahmadi’s nonprofit — the World Organization for Resource Development and Education (WORDE) — the Montgomery County Police Department, and the county government’s Faith Community Working Group.

The program is meant to encourage Muslims and other minority groups to succeed in the community by providing easy access to treatment.

Faith leaders, teachers, sports coaches, social service providers, parents, and police, are taught how to recognize people who are struggling, and may be showing signs of extremism.

“We have very good relationships with different portions of the community we serve,” says Lt. Michael Ward of the Montgomery County Police Department, who is the agency’s lead point person on the counter-extremism program. “But before this started, we didn’t have much relationship with the Muslim community. There was a trust issue between law enforcement and Muslims. This is an opportunity to develop outreach with one-tenth of the [Montgomery County] population that we didn’t have before.”

While Hidayat doesn’t have an official role in the Montgomery County Model, he has a special relationship with the community’s Muslims — because he literally represents who they are.

Every Friday, Hidayat prays at the Muslim Community Center in Silver Spring — Maryland’s largest mosque — shedding his uniform and gun for everyman apparel.

During Ramadan in June, Hidayat will take part in iftar dinners hosted by regular Muslims, marking the close of the holiday and the end of the daily fast. Sharif Hidayat, 42, is the first Muslim officer of the Montgomery County Police Department, where he has worked since 1999. (Photo courtesy of Sharif Hidayat)

Montgomery County is a place known for its size, affluence and diversity.

Having grown up here, Hidayat appreciates his role is to protect everybody.

“When I go to Friday prayers and hear what the imam says about community, he is really preaching the same thing that I live out in my position as a police officer,” Hidayat says. “Yes, as Muslims, you are a community, but you are also part of a larger community of Montgomery County. You are as responsible to your fellow man because you live here, you worship here, you work here. You do have a responsibility outside of your immediate community. I feel the exact same way.”

“You are as responsible to your fellow man because you live here, you worship here, you work here,” says Sharif Hidayat, a Montgomery County police officer.

Hidayat has been making these relationships for awhile.

“I grew up in District 4,” says Hidayat, whose parents immigrated from Egypt to Maryland’s Montgomery County, where he was born. “That’s why it’s personal for me. When I graduated from the academy they asked where I wanted to serve. I said I want to preserve the community I grew up in.”

For the last seven years, he’s been the community services officer for the 4th district, a large territory with urban, rural, and residential areas that includes parts of Rockville, Silver Spring, Wheaton, Olney, and Burtonsville.

As the only community services officer for the 4th district, Hidayat is in the business of crime prevention, and investigations, working to build relationships without the responsibility of responding to crime scenes.

“This position is unique in the sense that I can devote more time to chronic problems in the community, whereas patrol officers are really putting bandaids on incidents that need immediate attention and a quick resolution,” Hidayat said. “We are not trying to build the relationship after a disaster happens. The trust level is not there. During times of peace, there is a lot of communication.”

The policy of community policing has always been a staple of law enforcement, but it’s taken on added importance after recent incidents involving officer-involved shooting of civilians, who are often minorities.

“This idea of community policing is expected from law enforcement now,” Hidayat says. “That’s the difference.”

Montgomery County has been innovative in its approach, especially with its outreach to the sometimes hard-to-get Muslim community, Hidayat says.

Earlier this year, the police department brought on Imam Mohamed Abdullahi as the its first Muslim chaplain. Abdullahi, a Somali-American, is the imam of the Muslim Community Center.

“To have a Muslim police officer and a Muslim chaplain in the same department is almost unheard of,” Hidayat says. “That’s why our community looks a lot different than Ferguson [Missouri]. Our police department’s racial and religious makeup reflects the community, and I do believe this is the reason we don’t have half the issues that other jurisdictions have.”

That doesn’t mean crime doesn’t happen here. Montgomery County’s police force was devastated in December when one of their own, 24-year-old Officer Noah Leotta, was killed by a drunk driver.

“If people did go to church, or to synagogue, or to a mosque — or just believed in something bigger than themselves — society would be a lot better off,” says Sharif Hidayat, a Montgomery County police officer.

Leotta, Hidayat says, was passionate about getting drunk drivers off the road. He was working on DUI enforcement when he was struck by Luis Gustavo Reluzco, 47, of Olney, who was charged with vehicular-manslaughter and could be sentenced to up to 10 years in prison if convicted.

The experience of losing a friend and fellow officer has pushed Hidayat to reflect on the essence of his job — and his faith.

“Being a police officer, you see a lot of people at their lowest moments,” Hidayat says. “I believe the fundamental reason people find themselves in criminal situations is that they let their faith go. If people did go to church, or to synagogue, or to a mosque — or just believed in something bigger than themselves — society would be a lot better off.”