DOJ’s Lawsuit Against North Carolina Is Abuse of Power 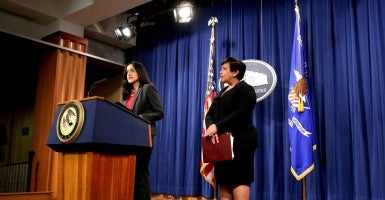 North Carolina has sustained unrelenting and coordinated attacks from big business, the entertainment industry, the American Civil Liberties Union, and now the federal government over its commonsense bathroom policies.

I must say, I’m very disappointed in my former colleagues at the Civil Rights Division at the Department of Justice. They know very well that when Congress banned discrimination “on the basis of sex” in 1964 and 1972, it did not mean “gender identity.”

It disrespects the very notion of the rule of law for them to hold otherwise, but that is exactly what they have done by threatening North Carolina with lawsuits, fines, and revocation of federal funds because they dared to write in law what most people consider simple common sense—that biological men should not be given unfettered access to public bathrooms, showers, and locker rooms set aside for the needs, safety, and privacy of biological women.

But if you thought the latest front in the bathroom wars was limited to North Carolina, you’d be mistaken.

Laws from the 1960s and 70s designed mostly to protect girls and women from rampant sexism and harassment at work and in schools are now being used by the Department of Justice to cow school districts to grant boys the right to undress in the girls’ locker room (and vice versa), all in the name of psychological comfort and acceptance. When President Barack Obama said he still has a pen and a phone this is apparently what he meant.

The radical left is using government power to coerce everyone, including children, into pledging allegiance to a radical new gender ideology over and above their right to privacy, safety, and religious freedom.

These developments prove that same-sex marriage was merely the start, not end, of the left’s LGBT agenda. The radical left is using government power to coerce everyone, including children, into pledging allegiance to a radical new gender ideology over and above their right to privacy, safety, and religious freedom.

To see how radical the left’s agenda is, consider that North Carolina law allows accommodation of people who identify as transgender with single-occupancy facilities in government facilities, so people who identify as transgender will have more options than those who don’t. But the left and the Department of Justice have rejected this reasonable approach, and insist on nothing less than total victory by total affirmation.

To add to the problems, the definition of gender identity changes about every three months, so the rules we are supposed to live by are constantly moving. Under proposed rules from the Department of Health and Human Services, sex would mean not just male or female, but also “neither, both, or a combination of male and female.”

Indeed, a few months after the federal government forced a neighboring school district to allow boys into the girls’ locker rooms or lose federal education funds, Chicago Public Schools discovered that sex is merely “a label a person is assigned at birth” and that the reality lies in one’s internal “psychological knowledge” of their own gender “regardless of the[ir] biological sex.”

This includes “male/man/boy, female/woman/girl, trans/transgender, gender variant, gender nonconforming, agender, gender non-binary, or any combination of these terms.” According to the left and some corporations, there are 60 possible gender identities.

The people of North Carolina should not be blamed for resisting such radical changes when there are real victims on the other side. Students in school districts facing these novel bathroom policies have spoken out against them and in favor of privacy.

Female victims of sexual abuse have explained that, while they are careful not to associate transgender people with predatory behavior, they cannot deny that seeing any stranger of the opposite sex undressing in intimate settings can be traumatizing and trigger memories of past abuse. Their voices deserve to be heard, too. And we are already seeing allegations of men not even identifying as women taking advantage of laws that have mandated access to locker rooms and bathrooms based on gender identity. That these laws will be abused by non-transgender people are not unfounded fears.

But whatever one thinks about gender identity, safety, and modesty, it is not the Department of Justice’s role to make up the law on this issue simply because it thinks it is lacking. Can we really still speak of it as “law” when one administration’s ideologically driven “guidance” and reinterpretations can potentially lead to overruling duly-enacted state laws?

If the next administration revokes the Department of Justice’s guidance, will the allegedly unlawful behavior instantly become lawful?

Our Constitution was designed to prevent this sort of arbitrary concentration of power and North Carolina was right to push back against the federal government’s unprecedented overreach.

This piece has been updated by the author to state that the Charlotte ordinance pertains to private businesses.