In 2015, 19,000 Criminal Illegal Immigrants Were Released From Custody 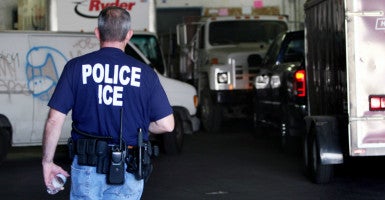 The U.S. Immigrations and Customs Enforcement Agency says it had sole discretion over one-third of the 19,723 criminal releases of illegal immigrants in 2015. (Photo: Ciro Cesar/La Opinion/Newscom)

More than 19,000 criminal illegal immigrants were released from custody in 2015, according to new figures disclosed by the U.S. Immigration and Customs Enforcement Agency.

The 19,723 criminal releases—as the government refers to them—represent a 35 percent decrease from fiscal year 2014.

The phrase “criminal releases” can apply to a wide range of crimes, including traffic violations—such as driving without a license—to more serious offenses like sexual assault, rape, and murder. Their crimes include misdemeanors and felonies.

According to the Center for Immigration Studies, which advocates for less immigration, the 19,723 criminal releases had a total of 64,197 convictions among them. More than 200 of those were homicide convictions. Most are traffic offenders.

On Thursday, the House Committee on Oversight and Government Reform convened a hearing to investigate the government’s process for detaining and removing illegal immigrants who’ve committed new crimes after arriving in the U.S.

Members of the Republican-led committee questioned ICE Director Sarah Saldana, and listened to testimony from the families of two victims who were killed by criminally convicted illegal immigrants.

“These are people that were here illegally, got caught committing a crime, were convicted of that crime and instead of deporting them, they were just released back out in the United States of America,” said Rep. Jason Chaffetz, R-Utah, chairman of the Oversight and Government Reform Committee.

As lawmakers questioned Saldana, she expressed regret for the murder of Connecticut resident Casey Chadwick and death of Iowa resident Sarah Root, who was killed by a drunk driver. But Saldana also said the government’s numbers, and the process of how and why criminal releases occur, are more nuanced than Chaffetz and other critics suggested.

“As a human being and a mother, never mind a person with prosecutorial experience, I feel very strongly whenever someone is injured or murdered by any person, and certainly by someone in the immigration system,” Saldana said.

“When the chairman says we just decided to let them out on the streets and chose not to deport them, that’s misleading. To sit there and say the proud men and women law enforcement agents of ICE are choosing to release criminals is absolutely unforgivable.” As Saldana explained, only one-third of the 19,723 criminal releases were the sole discretion of ICE.

The other two-thirds were released either because an immigration court judge had decided to grant bond to the immigrant, or because the home country of a person ordered deported refused to take that person back.

The illegal immigrant who was convicted in the June 2015 killing of Chadwick was a Haitian national named Jean Jacques. Jacques, 41, had a previous attempted murder conviction and should have been deported, but Haiti would not take him back.

“Something has to be done to fix this horrible problem,” said Wendy Hartling, Chadwick’s mother, in her prepared testimony. “I would never want any family to have to go through this. The pain is always with me. My heart is broken.”

Saldana said her agency is working with the State Department about how the U.S. government can punish countries that don’t comply with deportation orders of their nationals.

Saldana said she would support “looking at withholding [U.S. financial] aid” to countries that refused to comply, although that decision is outside her agency’s authority.

Under U.S. immigration law, ICE has the authority to release on bond illegal immigrants they come in contact with.

Some of the illegal immigrants are subject to mandatory detention, including those considered a flight risk or danger to public safety.

The person can challenge the immigration agency’s decision in immigration court, and can appeal to not be detained, or to get their bond amount reduced.

In light of this complicated process, Saldana defended her agency’s actions.

“It [the problem] is not so much a question of resources, but a function of a statute from Congress that gives people who are here illegally a complex set of rights, the ability to appeal, and have cases heard by immigration courts,” Saldana said.

“We cannot deport somebody without a final order of removal from court. ICE does not deport people on its own motion. We would be violating the statute.”

At least one Republican lawmaker said ICE should be more strict with the decisions it has authority over.

“Congress has given you the discretion to not deport people,” said Rep. Blake Farenthold, R-Texas. “I give my children authority to spend their allowance how they see fit, but I would have to revisit that if I thought they were being stupid in how they exercise that discretion. It seems you exercise the discretion in a way that’s resulting in tragic results.”

Saldana insists she and her agency are doing what they can.

Of the 11.2 million or so immigrants living in the country illegally, Saldana said, ICE only comes into contact with about 2 million of them at any given time. So about 9 million are “living in the shadows,” she said, and ICE is unaware of their whereabouts or criminal history.

Saldana said ICE currently has 34,000 detention beds authorized to hold illegal immigrants. About 32,000 of those beds are occupied today, although that number fluctuates day-to-day. The detained population includes recent arrivals and illegal immigrants charged with a crime.

“Because we don’t have the will or funds to deport 11.2 million, we have to make decisions on a case-to-case basis,” Saldana said. “Are we 100 percent accurate every time? Looking back, we strive for perfection. We are human and we do fall short sometimes. These are tough decisions.”