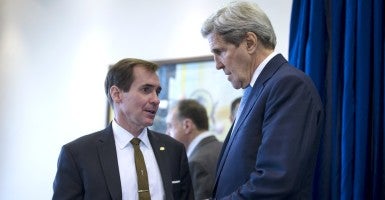 State Department spokesman John Kirby announced that the Obama administration plans to circumvent U.S. law in order to advance its climate agenda. This should come as no surprise, as the president has already circumvented the Constitution through not submitting what is clearly an international climate change treaty to the Senate.

U.S. funding for the United Nations Framework Convention on Climate Change (UNFCCC) should now be prohibited since the Palestinian Authority has signed on as a party to the treaty—and the U.S. does not recognize Palestinian claims of statehood. Under U.S. law, this should trigger a funding prohibition enacted in 1994:

Indeed, it is a long-standing U.S. policy that a unilateral declaration of Palestinian statehood would undermine internationally accepted frameworks for peace, including the U.N. Security Council Resolution 242 and other U.N. statements, and that recognition should occur only after a negotiated peace agreement with Israel. The Palestinian effort threatens both U.S. and Israeli interests, and the administration is right to oppose it.

This was Kirby’s defense for the administration’s plan to circumvent the law as quoted in The Hill:

The UNFCCC is a treaty, and the Palestinians’ purported accession does not involve their becoming members of any U.N. specialized agency or, indeed, any international organization. Further, we do not believe that it advances U.S. interests to respond to Palestinian efforts by withholding critical funds that support the implementation of key international agreements, which could undermine our ability to pursue important U.S. objectives. Specifically, cutting off funding for the UNFCCC, would deal a blow to our efforts to promote global action to address climate change.

It has been apparent for some time that the Obama administration views America’s relations with Israel as a low priority, certainly less of a priority than its climate change agenda. This explains the motivation to evade the law, but the legal angle—that the UNFCCC is a treaty not an international organization—is so inconsistent with reality that it is hard to believe that Kirby could state it with a straight face.

The United Nations Framework Convention on Climate Change is the founding legal document upon which the organization and its structure are based. The organization has an executive secretary. The UNFCCC employs “around 500 people” according to its website. The Conference of Parties is the supreme decision-making body, which approves the budget and major decisions. The UNFCC also has permanent subsidiary bodies, as illustrated here.

Contrast this with other treaties that the Palestinians have acceded to, like the Vienna Convention on Diplomatic Relations or the Convention on the Prevention and Punishment of the Crime of Genocide, which do not have such governance structures.

Other treaties, like the International Covenant on Civil and Political Rights, have minimal structural elements consisting primarily of their treaty bodies, which in the case of the ICCPR is comprised of 18 independent experts. There is no direct supporting secretariat or other permanent bureaucratic structures. Instead, budgetary and staff support are provided by the U.N. through the Office of the United Nations High Commissioner for Human Rights. On principle, the U.S. should also withhold its share of funding from these bodies, but the differences between these treaties and the treaty-based international organizations like the U.N. and the UNFCCC are clear.

In short, if the UNFCCC is not an international organization, then the term has no meaning.

In addition, the affiliation of the UNFCCC with the United Nations is clear. As summarized in an April 18 letter from 28 senators to Secretary of State John Kerry:

The UNFCCC, through its operating entities, constitutes an ‘affiliated organization of the United Nations.’ For example, the UNFCCC secretariat is connected and linked to the U.N. in many ways, including the following:

Based on these facts, it is clear that U.S. funding to the UNFCCC should be prohibited under current law. Nonetheless, Kirby’s comments indicate that the Obama administration is determined to provide funding. Congress should respond by providing no funding for and barring transfer of any funds to the UNFCCC and its related entities in the future.