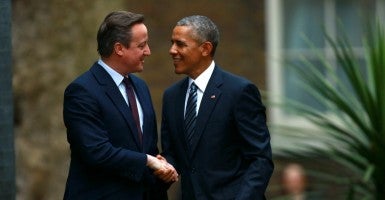 If Brexit does take place, the next American president must ensure that a U.S.-U.K. free trade deal is a top priority for the new administration. (Photo: Paul Marriott/Splash News/Newscom)

Last Friday Barack Obama made an extraordinary intervention into the British debate over whether or not to remain in the European Union. Just two months before voters across the United Kingdom go to the polls in an historic referendum on June 23, the U.S. president issued a stark warning to the British people on a visit to London—if they leave the European Union they will be placed at the “back of the queue” for a U.S.-U.K. free trade agreement.

Obama’s comments were a direct threat against those who wish to see Britain become a truly sovereign nation, with the freedom to shape their own destiny on the world stage.

They were meant to convey a message that the United Kingdom would be treated just like any other country by the United States if it reasserts its sovereignty, despite the fact that Great Britain is America’s most important ally in the world, with extremely close economic, defense, and intelligence ties.

Obama’s remarks echoed those of a senior Obama State Department official back in 2009, who told Britain’s Sunday Telegraph:

There’s nothing special about Britain. You’re just the same as the other 190 countries in the world. You shouldn’t expect special treatment.

Obama’s harsh words for the British electorate underscored the fact that his administration is no supporter of the Anglo-American Special Relationship. They were a sharp reminder that the Obama presidency all too often chooses to sneer at key allies (Israel is another prime example), while kowtowing to dictatorships and enemies of the free world, from Iran to Russia and Cuba. They were a wake-up call for anyone in Britain who believes that Obama has their interests at heart.

The president’s intervention was rightly met with a furious backlash in the British media, and was condemned by numerous Members of Parliament, including by the popular mayor of London, Boris Johnson. The British do not take kindly to being told how to vote, and there can be little doubt that the Obama intervention will backfire in June.

A new “YouGov First Verdict” survey shows that far more British voters were “angered” or “annoyed” by Obama’s intervention in the European Union referendum campaign than were “pleased.” The same survey revealed that nearly 60 percent of American voters disagreed with their president’s assertion that Britain should be forced to the back of the line if it sought a trade agreement with America, agreeing that “our two nations have always had a special relationship and America should never put Britain at the back of the line.”

If Brexit does take place, the next American president must ensure that a U.S.-U.K. free trade deal is a top priority for the new administration. A free trade agreement between the world’s largest and fifth largest economies would enhance prosperity on both sides of the Atlantic, and be a powerful force for economic liberty.

As my colleague Ted Bromund and I argue in a major Heritage Foundation report: “a US-UK free trade area should serve as a symbol of and a real contribution toward a shared Anglo-American rejection of supranational control and the shared belief that government must be based on sovereignty and freedom.”