Yes, Terrorists Are Setting Their Sights on Our Southern Border 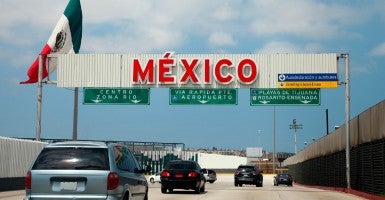 According to press reports, a man arrested as part of an Islamic State (ISIS) group in Minnesota claimed he wanted to setup a pipeline to funnel terrorists into the U.S. through Mexico. The story rekindles concerns over the security of our southern border.

It should come as no surprise that there are reports of terrorists trying to cross from Mexico to the U.S.—it’s been tried before. In 2011, Iranian agents tried to recruit a Mexican cartel to assassinate the Saudi ambassador to the United States with a car bomb while he dined at a restaurant in Washington, D.C.

The assault on our border is overwhelming—and it’s not just about jumping over walls. U.S. officials just discovered a massive 800-foot tunnel under the border—complete with elevator. This means that bad actors are increasingly flying over the border, and they’ve used undersea craft, as well as speedboats, to smuggle people into the U.S.

Further, the Obama administration has a dismal record in securing our southern border, exacerbated by self-defeating immigration policies that ignore the law and encourage waves of human smuggling across the border.

The U.S. is lacking effective, and persistent, border security with responsible enforcement of immigration laws.

Serious efforts to stop terrorists demands vigilance at the border.

It’s also important to note that many of the terrorist plots we see aimed at Americans come from—America. There have been 10 successful terror plots within the U.S. since 9/11 that were led by Americans. Of the failed plots, 63 out of 74 involved homegrown terrorists.

This doesn’t mean we get to ignore the threat from abroad and our borders and ports of entry, but rather that we can’t solely focus on our southern border problems.

When it comes to stopping terrorists from overseas, there are lots of places to stop them. This means our goal should be to stop them long before they get near our borders. There are lots of ways President Barack Obama could be doing more to shut down the pipeline of foreign fighters.

Critically, Obama ought to be doing more to stop the heartbeat of the Islamist insurgency—which comes from ISIS’ control of vast territories in Iraq.