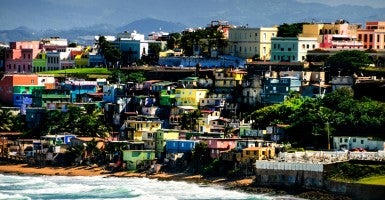 There is no reason Congress has to pass legislation addressing Puerto Rico’s crisis. (Photo: istockphoto)

On Tuesday, the House Committee on Natural Resources released a revised draft of its “PROMESA” bill, which is legislation for a federal intervention in Puerto Rico’s fiscal crisis.

Regrettably, the proposed legislation does little to advance economic reform on the island and fails to remain neutral in the tussle among creditors, designing a brand-new restructuring process instead of relying on negotiation and current law.

In an April 1 issue brief, we laid out three conservative priorities for Puerto Rico:

The newer draft, released on April 12, maintains the strengths of the earlier discussion draft but does not address its weaknesses.

Taking a step back for a moment, there is no reason Congress has to pass legislation addressing Puerto Rico’s crisis. While the U.S. territory is severely cash-strapped and cannot afford to make all payments on its $72 billion debt load, the island does have an existing legal framework through which debts can be settled and an existing territorial government—albeit an inefficient and crony-ridden one—that could address its economic crisis.

The draft offers no direct financial bailouts to creditors or to Puerto Rico. As a matter of political precedent, it is vital that fiscal crises do not result in favorable treatment.

The current draft offers Puerto Rico’s government the opportunity to give workers under age 25 a five-year exemption from the federal minimum wage. That’s a step in the right direction, but the opportunity is unlikely to be seized, given the reign of progressive politics on the island.

This is a reminder that conservatives in Congress should be wary of taking ownership of problems that have been created by generations of leftist policies. Puerto Rico must take responsibility for the harmful results of its own policies.

It was hoped that the newer draft would extend more accurate reporting requirements on unfunded pension obligations that were required for Puerto Rico in the Discussion Draft to all U.S. states, municipalities, and territories. Doing so would protect investors and help prevent future debt crises. Instead, the present draft went in the opposite direction by removing the consequences of the previously stipulated new reporting requirements for Puerto Rico in lieu of a one-time study. It is in the best interests of voters, public employees, and creditors that unfunded pension obligations be accurately, consistently, and regularly disclosed.

The current draft improves on the discussion draft by giving the oversight board a mandate to lean on Puerto Rico’s legislature to pass pro-growth reforms. The power to do so remains in the legislature’s hands, and optimism about their willingness to divest the government cronies who have profited so well from the island’s corporatism is probably unwarranted.

The current draft maintains two provisions that break the continuity of creditors’ legal claims. One provision, Title III of the legislation, extends bankruptcy proceedings that are substantively identical to Chapter 9 bankruptcy to Puerto Rico. The only ameliorating factor is the good conscience of the oversight board.

Worse still, the draft would enact an immediate stay on litigation, allowing Puerto Rico to default on payments in early May without consequence and before the oversight board has become active.

Litigation will not, contra some claims, create chaos in Puerto Rico’s economy. It is not the plodding process of lawsuits through the courts, but rather their resolution therefrom that results in ripples (good or bad) through the outside world.

The draft’s addition of a process for adding collective action clauses to existing bond indentures would expedite negotiations in the absence of Super Chapter 9 bankruptcy option and a legal stay. But the draft’s Super Chapter 9 gives Puerto Rico and the oversight board a whip hand, tilting such negotiations in their favor, and the stay on litigation reduces the incentive for Puerto Rico and the Oversight Board to come to the table.

Imposing collective action clauses with less than unanimous consent is not ideal, but they represent a much smaller potential deviation from legal continuity than either Super Chapter 9 as proposed here or the stay of litigation.

However, even pre-existing collective action clauses are little comfort to a creditor facing an oversight board with a “fiscal plan” of its own and the power to enforce it with the normal legal process sidelined.

The proposed legislation substitutes the wisdom of a seven-member oversight board for the normal process and functioning of the law. Although the members of the board will no doubt be wise and well-intentioned, their wisdom is not the legal safeguard that creditors purchased. Nor will their wisdom, powerless to reform the progressive cronyism at the heart of Puerto Rico’s economic woes, suffice to move the island from decline to prosperity.

As conservatives in Congress consider this bill, they should keep in mind the principles outlined above. Some ways of moving this bill toward a constructive, conservative solution include: