Here’s Why Republicans Are Demanding Names in Fetal Tissue Probe 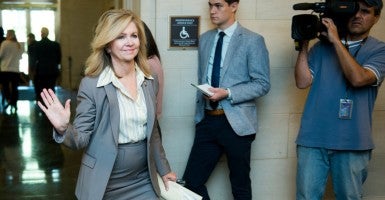 Rep. Marsha Blackburn, R-Tenn., is chairman of the Select Investigative Panel on Infant Lives, which is examining the practices of abortion providers and the procurement organizations that sell the body parts of aborted babies. (Photo: Bill Clark/CQ Roll Call/Newscom)

Confronting critics who say she is conducting a “witch hunt,” the chairman of a special House panel investigating the supply of tissue from aborted babies to researchers said in an interview with The Daily Signal that the panel can’t do its job without understanding the roles of all those involved.

“We know that it’s important that we act responsibly with each and every name,” Rep. Marsha Blackburn, R-Tenn., who leads the House investigation of the fetal tissue industry, told The Daily Signal in a phone interview.

“But it is impossible for the panel to complete the investigation that we are charged by the House resolution to complete without full knowledge and without an understanding of the individuals involved in the transactions and the practices that we have been asked to investigate.” Democrats on the select panel call the investigation a political “witch hunt” by Blackburn and other Republicans who oppose abortion. They’ve condemned the panel’s investigators for requesting the names of doctors, medical students, researchers, and others involved in the abortion and fetal tissue procurement industries, arguing that obtaining those names could make the panel “complicit in physical assaults or murders of these people.”

In making that argument, some Democrats cite the Planned Parenthood shooting in Colorado last fall.

Schakowsky, the panel’s ranking member, said Democrats share the concerns of those contacted or subpoenaed by the panel for “the safety of their researchers, students, doctors, and clinic personnel.”

“Chair Blackburn has refused to explain why she needs a database of names,” Schakowsky said. “It is time for this witch hunt to come to an end.” The House’s Select Investigative Panel on Infant Lives formed in October in response to a series of undercover videos by a pro-life group showing high-ranking Planned Parenthood officials haggling over the price of fetal tissue.

While Planned Parenthood repeatedly has denied any wrongdoing and was cleared in multiple investigations, the videos raised questions about whether abortion providers and businesses that facilitate the transfer of fetal tissue illegally or improperly profit from those transactions.

In pursuing the investigation, Blackburn said in the interview last week, staffers will gather information about how the fetal tissue procurement industry works and ensure that buyers and sellers follow current laws regulating the industry. The panel will decide whether to advance any recommended changes in a report to Congress on how the industry is operating.

In total, the select panel has issued 15 subpoenas since February to entities and individuals that refused to cooperate with its requests that they voluntarily supply documents.

The panel “all agrees,” Blackburn said, that patient information and information ccovered by the Health Insurance Portability and Accountability Act should be redacted from those documents. But members differ on whether organizations should be compelled to release the identities and other personal information of employees who utilize fetal tissue in their work.

The Daily Signal asked one of the panel’s lead investigators to describe the scope of the investigation and explain why obtaining names is important. He agreed to speak on the condition of anonymity because of the ongoing probe.

“When there is a law out there and there’s federal funds or taxpayer money involved, and there’s allegations of questionable conduct, the taxpayers of the United States deserve to know what’s going on,” the panel’s investigator said in an interview.

“It’s hundreds of millions of dollars a year involved in this sort of thing. Every year—year in and year out, all across the country. It’s a legitimate question for Congress to ask.”

A 1993 law, the National Institutes of Health Revitalization Act, makes it illegal to sell fetal tissue for a profit. That law allows for “reasonable payments associated with the transportation, implantation, processing, preservation, quality control, or storage of human fetal tissue,” but it does not define “reasonable payments.”

To gauge how the industry is interpreting the law, the select panel’s investigators are tracing specific transactions between suppliers of aborted body parts and other fetal tissue—such as Planned Parenthood—and entities that purchase the material and provide it to research institutions—such as StemExpress. It is typical for abortion clinics to work with “middlemen” such as StemExpress to facilitate the transfer of tissue. ‘They Don’t Want Us to Know’

So why couldn’t investigators examine these relationships without naming specific individuals?

“Certainly, you have entities that make transfers [of fetal tissue],” the investigator told The Daily Signal. “But what you really have is people making transfers.”

“Some entities have shared with us the names of individuals, but in the transactions those same names are blacked out, making it impossible to understand what is going on,” he said, adding:

This begs the question as to whether they are really concerned about providing the names or more concerned about giving us the names as they relate to the transactions. So when an organization is willing to provide you with the names of individuals and where they work, but then in the correspondence they include in their production the names are blacked out, what is the only reasonable conclusion we can reach? They don’t want us to know what is actually going on with these transactions.

Beyond the legality question regarding fetal tissue transactions, the panel is also seeking to determine whether fetal tissue from aborted babies is necessary to medical research or is a cost-saving convenience.

In order to figure this out, the investigator said, he must be able to link the fetal tissue to a final product, which means pursuing its paper trail.

“I need the study to see if the study really needed fetal tissue or to see if it was a cost savings or convenience, or there’s a scientific reason for that. And so I need to be able to get the studies,” he said, adding, “Now, I don’t know how to find that out when all the documents I get are so redacted.”

Also a factor in the need for names, the investigator suggested, is that in some cases, money isn’t the only currency when it comes to supplying or acquiring organs or other fetal tissue from abortions. ‘Locked in a Safe’

The investigator said he and his colleagues repeatedly have told institutions, research centers, and other entities on the receiving end of requests and subpoenas for documents that the panel proposes to use pseudonyms or other designators, so the names of lower-level witnesses would not appear in public or committee publications.

That same accommodation was not offered to higher-up staff and owners of companies such as BioMedical Research Institute of America, located in San Diego, Calif., The Daily Signal has learned.

“We’ve told these people over and over again,” the panel’s lead investigator said, “we’ll agree to a coding system where a person can be called ‘A’ ‘B’ ‘C’ ‘D’…, ‘Witness A’, ‘Witness B,’ ‘Witness C,’ and you can submit those names on one physical list.”

The Daily Signal asked Schakowsky, the select panel’s ranking member, whether a coding system for lower-level staff witnesses would be, in her opinion, sufficient to protect their identities. She did not respond to that request.

The panel would put the list of actual names in a safe, far from any “database,” the investigator said, adding:

We’ve got a safe for that purpose, and only one person would have access to that safe. And that would be someone like the chairman of the committee—staff wouldn’t have access to it. So we’ve made all kinds of offers like that, which is historically the way Congress has handled this.

But those organizations, he said, “won’t even agree to that.”

“What our investigative mind has to conclude is that at some level, nobody wants us to find out the true nature of these transactions,” he said. “And I don’t know why that is, unless there’s some reason.”