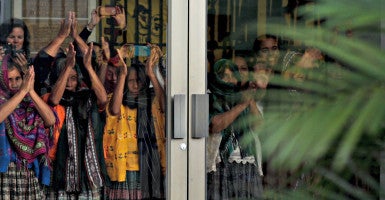 Indigenous women of a Mayan ethnic group acknowledge their supporters Feb. 26 in Guatemala City after a judge sentences two men to life plus in prison for crimes including sexual violence and slavery against 15 women over more than 20 years. (Photo: Josue Decavele/Reuters/Newscom)

Conservatives, however, argue that Corker’s bill would duplicate current government programs and not sufficiently guard against the use of funds to pay for abortions for victims of human trafficking.

Over 27 million people, including many women and children, “suffer in forced labor and sexual servitude in more than 165 countries,” Corker’s office says.

Human trafficking is a $150 billion worldwide industry that “destroys lives, destabilizes countries, and fuels organized crime and terrorist networks that threaten U.S. interests,” a Corker aide wrote in an email to The Daily Signal, adding: “To eliminate slavery on a global scale, we need a coordinated effort that allows us to focus resources responsibly where this crime is most prevalent.”

Critics on the right, though, hesitate to get behind Corker’s legislation because of the abortion issue.

“There are real concerns that the bill lacks sufficient pro-life statutory protections and would create a foundation that could use non-federal donations to fund groups that provide abortions,” a senior Republican aide told The Daily Signal.

In a “memo to the movement,” emailed Tuesday, a coalition called the Conservative Action Project said Congress first should demand the enforcement of current laws to halt modern slavery and “uphold the principle that government action should protect life.”

The Corker bill, identified as S.553 and introduced in February 2015, does not specify countries where human trafficking thrives.

Some of the worst places include North Korea, Eritrea, Syria, Iran, Venezuela, Cuba, and Malaysia.

“Success abroad also will lead to success at home,” the Corker aide said. “Stopping perpetrators of slavery overseas will prevent them from exporting their crime to the United States.”

Corker’s office cites figures from a coalition to fight modern slavery called the End It Movement, with member organizations including well-known groups such as the Salvation Army and World Vision.

Under the bill, the End Modern Slavery Initiative would seek to raise $1.5 billion, with more than 80 percent through matching funds from the private sector and foreign governments.

“The U.S. government will channel diplomatic support and additional resources for law enforcement, rule of law, economic development, and training assistance in support of the End Modern Slavery Initiative,” a summary on Corker’s Senate website says.

Although the bill passed unanimously Feb. 3 out of the Senate Foreign Relations Committee, where Corker is chairman, not all of his Republican colleagues are on board—especially because of the issue of abortion.

A major sticking point concerns the Helms Amendment, a 43-year-old measure that declares: “No foreign assistance funds may be used to pay for the performance of abortion as a method of family planning or to motivate or coerce any person to practice abortions.”

The 1973 amendment is named for Jesse Helms, the late Republican senator from North Carolina, and was passed by Congress shortly after the U.S. Supreme Court legalized abortion with its ruling in the Roe v. Wade case that same year.

Corker’s office insists there is no conflict.

“All the funds authorized in the amended version of S.553 will flow through the appropriations process, which [is] fully covered by the Helms restriction,” the aide said.

But in their memo, the 70 conservative leaders—who are affiliated with but don’t represent various organizations—argue that consistency requires applying the Helms amendment to donations from other governments and private parties, even if doing so would dissuade abortion-friendly countries from participating. They write:

While the portion of the funding from the U.S. government would be covered by existing statutory prohibitions on U.S. government monies being used to fund abortions, the funding from other governments and from private individuals would not be subject to the prohibition. Therefore, in order to be truly effective in the fight against human trafficking and its related evils, the language in the legislation should be strengthened by including a provision to protect human life.

“The fight against trafficking is rooted in the principle of the dignity of every human life,” Sarah Torre, a policy analyst on family issues at The Heritage Foundation, told The Daily Signal. Torre, co-author of a new policy paper on the bill, added:

That principle should not be overlooked when it comes to caring for pregnant women who are the victims of trafficking and their unborn children. To do so would be to undermine the sound moral framework on which the anti-trafficking movement rests. Efforts to address human trafficking should align with that principle, ensuring that neither taxpayer funds nor funds from any organization or program established by Congress can be used to take innocent human lives.

Sen. Mike Lee, R-Utah, proposed an amendment to Corker’s bill to prevent “any nonprofit or entity receiving funds from the foundation (including any subgrantees of such an organization or entity) to pay for the performance of abortion as a method of family planning or to motivate or coerce any person to practice abortion.”

Corker declined to accept Lee’s amendment. His staff argues that sufficient safeguards against funding for abortion exist in the current version.

All told, the federal government spent roughly $109.5 million in fiscal year 2010, the most recent year for which complete data is available, on global and domestic anti-human trafficking efforts. These did not include “operations and law enforcement investigations,” according to the Congressional Research Service.

Another red flag in the Corker bill for conservatives: which nations would be eligible for anti-trafficking funding as “partner countries.”

In most cases, foreign governments themselves aren’t directly involved in human trafficking, she said.

The legislation is a work in progress, Corker’s office says.

“Senator Corker continues to work with his colleagues to address outstanding concerns and is hopeful the Senate will move soon to pass this transformative legislation,” a Corker aide told The Daily Signal on Tuesday.

In the earlier email, his staff wrote:

The foundation has the specific goal of achieving a 50 percent reduction in the incidence of modern slavery in the areas where the initiative is operating. The legislation also requires the foundation to establish rigorous monitoring and evaluation criteria, including establishing baseline data and requiring regular evaluation of progress. The board of directors also must establish specific and detailed criteria for the suspension and termination of projects that consistently fail to meet that criteria.

The bill requires the new foundation to comply with the Government Accountability Office’s financial audits and program evaluations, including providing full access to its records. It also requires the GAO to review existing government programs on human trafficking, including Corker’s End Modern Slavery Initiative.

The GAO, his staff said, would “make specific recommendations on which programs are not effective at reducing the prevalence of human trafficking and how the funding for such programs may be redirected to more effective efforts.”

The legislation calls for Congress to appropriate funds annually for the initiative, giving lawmakers the opportunity to assess its effectiveness and “consider policy riders to address any concerns that may arise, or suspend funding altogether.”

Authorization for the program would expire after seven years.