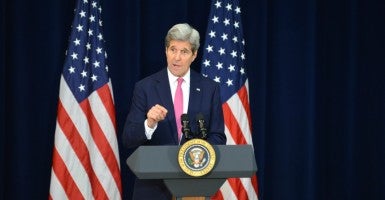 Secretary of State John Kerry announced that he believes that the Islamic State (ISIS) is committing genocide in the Middle East “against groups in areas under its control including Yazidis, Christians and Shiite Muslims.”

Earlier this week, the House of Representatives unanimously passed H. Con. Res. 75, which declared these actions genocide, and last month, the European Parliament overwhelmingly passed a resolution stating the same.

With this announcement, the Obama administration thankfully joins Congress and much of the Western world in declaring ISIS’ actions genocide. The recognition of genocide was the right thing to do. But it must be followed up with action.

Standing idly by will be difficult in light of a new report by the Knights of Columbus and In Defense of Christians documenting in detail that genocide is, indeed, occurring. This report was apparently requested by senior State Department officials themselves, who asked for help in making the case that a genocide against Christians is taking place. As discussed in the report, those responsible for genocide could be indicted in federal court if there is probable cause to believe they have committed the offense. A finding of probable cause, which is not too difficult in this case, provides a clear marker for the State Department and anyone else to determine that genocide has occurred and must be prevented from continuing to occur.

The report contains multiple witness statements with responses to questions asking for name, gender, why and when the respondents left their villages, what happened to them, and whether they had been physically hurt.

It also lists more than 1,000 Christians killed from 2003 onward and includes lists of attacks on Christians and churches, names of those murdered, a list of Christian and Yazidi sex slaves, and other documents evidencing that genocide has occurred.

The report is comprehensive and gives the State Department and anyone else everything they need to declare that a genocide against Christians has been occurring and must be stopped going forward.

The report also recounts the explicit and clear statements from the genocidal organizers themselves that their acts are intended to wipe out Christians. One such declaration in ISIS’ official magazine informs Christians that this will be ISIS’ “final campaign” in which they “will be broken and defeated. … [W]e will raid you thereafter, and you will never raid us. We will conquer your Rome, break your crosses, and enslave your women.”

According to ISIS’ own words, it intends to cleanse the “caliphate” along religious lines. By its own actions, it has been killing and driving off Christians and others based solely on their religion.

All the elements of genocide, including the intent elements, are satisfied here. As renowned genocide scholar William Schabas notes in his book Genocide in International Law, “[i]f the accused accompanied or preceded the act with some sort of genocidal declaration or speech, its content may assist in establishing the special intent” required by the definition of the crime.

While genocide is clear in this case, far too few have been willing to own up to its grim reality. Thankfully, the Obama administration decided not to shrink away from this recognition. Now we must follow up this declaration with action.

Under the Convention on the Prevention and Punishment of the Crime of Genocide of 1948, to which the United States is a party, states have an obligation to prevent genocide, as found by the International Court of Justice in the Bosnia v. Serbia case, by which they must “[e]mploy all means reasonably available to them, so as to prevent genocide so far as possible” and “take all measures to prevent genocide which were within [their] power, and which might have contributed to preventing the genocide” (see paragraph 430).

This obligation to prevent genocide is not “limited by territory,” but rather “appl[ies] to a State wherever it may be acting or may be able to act in ways appropriate to meeting” that obligation (see paragraph 183).

Consistent with international law and other applicable legal requirements, the United States is now obligated to act to prevent the genocide in territories under ISIS’ control. This obligation does not directly require military intervention, but it does mean we must do what we can.

In addition to triggering our legal obligation to prevent and punish genocide, a declaration that ISIS is committing genocide against Christians, Yazidis, and others will increase the moral pressure on the world’s conscience to do more to stop what never should have occurred in the first place.

Thankfully, the president has recognized what is occurring in the Middle East. Now is not the time to waffle on action. Should we prioritize petty political considerations over the weighty need to act—in reality, over human lives—we will permanently tarnish our reputation.