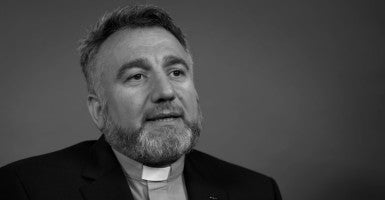 Father Douglas al-Bazi, a priest at Mar Elia Refugee Camp in Erbil, Iraq, says he was taken hostage by terrorists in November 2006.

For eight years, Father Douglas al-Bazi says, he never spoke about the time he was held hostage by terrorists in Iraq.

But now, al-Bazi is telling his story to inspire the United States to make the ultimate statement against the terrorists of the Islamic State—to declare that ISIS’ attacks against Christians constitute “genocide.”

When al-Bazi was kidnapped by terrorists in November 2006, the Islamic State, also known as ISIS or ISIL, didn’t formally exist yet. Al-Bazi was vicar of the St. Elia Catholic Church in a working-class neighborhood of Baghdad, making him, and his church, a target of the terrorists because of the religion he practiced there, he says.

“I got shot and survived many times,” al-Bazi said. “They robbed my church. It happened after the ceremony Mass. They told me, personally, we don’t know you. We have a list, and your name is on the list. And they told me, we have to bring you here. We lost everything because we are Christian.”

Over nine days in captivity, al-Bazi says, the terrorists smashed his face with a hammer, crushing his front teeth and breaking his nose.

He was released after the Chaldean Catholic Church paid $80,000 in ransom.

“I thought at that time, they are going to kill me in the end,” al-Bazi said. “What destroyed me is not that pain, but the pain [that] nobody cares about us.”

In 2013, as ISIS became a greater threat, al-Bazi fled to Erbil, the capital of Iraqi Kurdistan, where he works as a priest at Mar Elia Refugee Camp.

By 2014, the U.S. and allied countries began a military campaign against ISIS in Iraq and Syria.

The Knights of Columbus, one of the largest Catholic organizations in the world, is using al-Bazi as the face of its campaign to pressure the Obama administration to label ISIS’ treatment of Christians as genocide.

Last Thursday, the Knights of Columbus released a report identifying by name more than 1,100 Christians who have been killed by ISIS. The report also documents numerous attacks, including destruction of churches, rape, kidnapping, torture, and enslavement.

On Monday, the U.S. House passed a non-binding bill by a vote of 393-0 declaring ISIS’ actions against Christians and other minority groups, including the Yazidis and Kurds, “genocide, war crimes and crimes against humanity.”

Congress last year set a March 17 deadline for the State Department to announce whether ISIS is guilty of genocide against minorities. If Secretary of State John Kerry determines that ISIS has committed genocide, it will be only the second time the U.S. has made that distinction during an ongoing conflict, according to the Associated Press.

In 2004, then Secretary of State Colin Powell said atrocities being committed in Sudan’s Darfur region qualified as genocide.

Though it’s unclear what the impact of a genocide designation would mean—and whether it would impose an obligation for the U.S. to take additional action to protect the affected minority groups—al-Bazi believes that it would be a signal of reconciliation for Iraq.

“If we recognize this as genocide, it is the first step in recognizing the truth that has happened to us,” al-Bazi said. “To not say the truth means you are giving to the terrorists a green light—go ahead and kill the Christians. The end of the story will be when people reconcile, forgive, and go to the next step—and live in harmony again.”