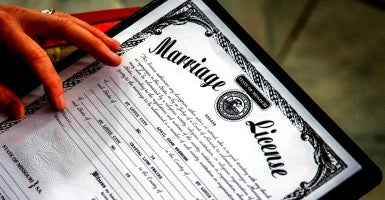 The cultural left still wants to crush dissent from its new sexual orthodoxy, no matter how small. (Photo: Whitney Curtis/REUTERS/Newscom)

A minority of Missouri legislators held a much needed religious liberty proposal hostage in Jefferson City over the last two days. Democrats there filibustered for over 36 hours against SJR 39, a commonsense bill that would let Missouri citizens vote to ban government discrimination against people of faith because of their beliefs about marriage.

This was the most misguided filibuster since Wendy Davis tried (and failed) to block Texas from adopting reasonable limits on late-term abortions and commonsense clinic safety standards.

As we have seen in Indiana, Georgia, and West Virginia, big business and the left have once again teamed up with government actors to form a triumvirate of cultural cronyism aiming to block popular religious freedom protections.

Missouri’s proposal ensures continued religious freedom, a freedom that is acutely threatened in the wake of the Supreme Court’s redefinition of marriage last summer. Those who remain true to their religious beliefs about marriage need protection from government discrimination like never before, and the Missouri proposal provides just that.

Opponents of the Missouri proposal nevertheless claim that it will lead to widespread LGBT discrimination. This is false.

The Missouri proposal does not take anything away from anyone. It specifically says that it shall not take away anyone’s right to a government marriage license, to receive government benefits (such as health insurance or tax deductions), or to visit a sick spouse in a hospital.

The proposal is an anti–discrimination measure that protects the rights of all Missourians to be free from government punishment and coercion when they live out their beliefs about marriage.

The Missouri proposal would protect this freedom by a constitutional amendment, which means that once the protections are in place, people of faith will be insulated from state judges or politicians that are (or may become) hostile to religious freedom. It means the people of Missouri get a direct say in their own governance. It means that religious freedom is protected for all, both now and in the future.

Although the proposal is not perfect, and language improvements can and should be made before final adoption, the protections in SJR 39 are generally precise, clear, and concrete—so much so that a filibustering senator was asked to point to a provision, any provision, in the proposal that was discriminatory but was unable to.

This is because the Missouri proposal would prevent discriminatory government action, not unleash it. Here are some examples:

In short, like the federal First Amendment Defense Act on which it is based, the Missouri proposal would guarantee that religious institutions can retain their religious identity in private life, in public life, and in service to the poor and the needy in the community.

The proposal also protects people like Barronelle Stutzman, a 70-year-old florist from Washington state who was happy to serve gays and lesbians but was sued, fined, and harassed because she declined, based on her Christian faith, to make custom floral arrangements to celebrate a same-sex wedding. It would likewise protect the Klein family of Oregon, who were fined $135,000 for declining to make a cake celebrating a same-sex wedding in violation of their faith.

Contrary to the mischaracterizations of opponents, the Missouri proposal protects only “closely held” businesses, only when they provide goods or services “of expressional or artistic creation” and only in the context of wedding celebrations and marriages that they cannot in good conscience endorse. In practice, this means family-owned bakers, florists, and photographers would be protected when providing custom wedding services, but not Hilton hotels.

But even these modest protections are still too much for some. Big Business still wants to crush its small competitors. The cultural left still wants to crush dissent from its new sexual orthodoxy, no matter how small. But perhaps worst of all, a few government actors still want to deny the people of Missouri the ability to even have a voice in determining their own future on these matters.

The people of Missouri should get to decide whether their state will be an inclusive place that protects reasonable and long-standing religious beliefs about marriage now and for the generations to come.

The Missouri legislature wants to give them that chance, if only the obstructionists using extreme tactics get out of the way.

This article has been updated by the author to reflect his views on improving the proposal’s language before adoption.