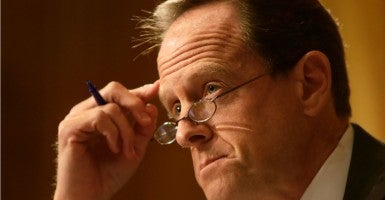 The Republican-led Senate Judiciary Committee has vowed to block the path for President Barack Obama’s eventual Supreme Court nominee. But Sen. Pat Toomey is asking that committee to quickly let through two different Obama nominees from his home state of Pennsylvania.

The Republican senator’s push comes as the Senate continues to clash over whether Obama or the next president should fill a vacancy on the Supreme Court created by the Feb. 13 death of Justice Antonin Scalia.

Republicans, including Toomey, have pledged to keep the seat open until after the 2016 election. And on Tuesday, GOP senators on the Judiciary Committee announced that the panel would “withhold consent on any nominee to the Supreme Court submitted by this president.”

That hasn’t stopped Toomey from pressuring Senate Judiciary Chairman Chuck Grassley to advance John Younge and Robert Colville, nominees for district judgeships, out of committee and to a floor vote.

In a Feb. 19 letter, Toomey wrote Grassley asking him “to promptly consider the nominations of Judge John Younge and Judge Robert Colville.”

Toomey has faced criticism from Democrat challengers for his opposition to the confirmation of any nominee to replace Scalia on the Supreme Court. For lower courts, however, Toomey has boasted of his role in getting Obama’s nominees confirmed.

Earlier this year, at Toomey’s urging, the Senate confirmed Luis Restrepo for a lifetime appointment to the U.S. Court of Appeals for the 3rd Circuit. He’s the only Obama appellate court nominee to get a Senate confirmation vote so far this year.

In the letter to Grassley, Toomey notes that Pennsylvania trails only two states—California and New York—for the most judicial confirmations over the last five years with 16. He said the “bipartisan process” he’s developed with Pennsylvania’s Democrat senator, Bob Casey, has “proven highly effective.”

In the case of Younge and Colville, a Toomey aide would only say that the senator “supports these nominees and continued to push for their confirmation.” The spokesperson declined to answer whether it was inconsistent to push for the federal district court nominees while blocking a potential Supreme Court nominee.

Nominated by Obama for federal judgeships in the Western and Eastern District Courts of Pennsylvania, the pair has remained in committee since July 2015. Sources familiar with the proceedings say the two failed to impress the committee during the confirmation process.

In particular, some Republican committee members weren’t satisfied with either Colville or Younge’s answers on state’s abilities to regulate access to abortion.

Before Scalia’s death, conservatives argued that the confirmation process should be shut down entirely to protest what they consider Obama’s ongoing executive overreach. Liberals maintained that the process was entirely too political already.

But now it’s not clear whether the current political climate will hinder or help the pair. GOP leadership remains under pressure to show that the Senate can still function. Advancing the duo could counter Democrat attacks of obstructionism.

Sen. Richard Blumenthal, D-Conn., cheered the idea of considering the Pennsylvania nominees and any other judicial nominee at any level.

The first-term Democrat, who sits on the Senate Judiciary Committee, called for “movement on all nominees from the Supreme Court on down without regard to the party of the senator [who nominated them].”

Sen. Chris Murphy, D-Conn., took a less charitable view. He told The Daily Signal that if the GOP continues to hold up an Obama Supreme Court pick, it’s “hypocritical for the Senate to do any business this year.”