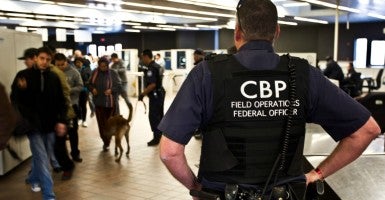 This new policy requires U.S. border patrol agents to release an illegal immigrant from custody as long as he or she has not been convicted of a felony crime and claims to have continually resided in the United States prior to January 2014. (Photo: Josh Denmark/ZUMA Press/Newscom)

Evan McDermott is a member of the Young Leaders Program at The Heritage Foundation.

Four out of 10 illegal immigrants never show up for their court hearings. That’s according to Brandon Judd, president of the National Border Patrol Council (which represents border patrol agents).

This shows that the Department of Homeland Security (DHS) has disregarded the rule of law as it prioritizes its own administrative policies over current immigration law.

According to Judd’s testimony, in response to such embarrassingly high levels of no-shows, DHS has changed its policy. This new policy requires U.S. border patrol agents to release an illegal immigrant from custody as long as he or she has not been convicted of a felony crime and claims to have continually resided in the United States prior to January 2014.

The impacts of this are twofold. First, many removable illegal immigrants are simply released into the United States. Second, such policies make it appear as though fewer illegal immigrants are skipping their court hearings than actually are. After all, if they are never instructed to show up at court, DHS and the Department of Justice do not have to account for them as absconders.

As a result of this and other efforts not to enforce immigration laws, U.S. border patrol officers and immigration agents are unable to properly conduct their duties, as drug cartels take advantage of the ensuing chaos. This is inexcusable.

It should come as no surprise, then, that removals and returns from the U.S. continue to drop, reaching the lowest point since 1971. Deportations from the interior of the U.S. have fallen dramatically, and even the removal of criminal aliens is plummeting.

Even more shockingly, when asked what the consequences would be for a border patrol agent who violated DHS policies in favor of adhering to federal law, Judd testified that “if they do not comply with the policies that are given, we could terminate [them].” As a result, U.S. border patrol agents are being forced to ignore federal law in favor of obeying DHS policies or face the consequences.

Despite its statements to the contrary, the Obama administration has the ability to more quickly and effectively remove illegal immigrants by means of the 287(g) program and “expedited removal” provisions that are enshrined in federal law. Rather than look for excuses to ignore the law, DHS should be using the tools at its disposal to uphold the law.